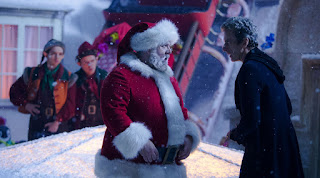 For December, and since this year's Special isn't until New Year's Day, a reminder of our Doctor Who expert Tony Cross' thoughts on New Who Christmas Special episodes from the past. Here is the Twelfth Doctor adventure Last Christmas...

Let us travel back to Christmas Day 2014. Our presents have been opened, we're stuffed with Turkey and Christmas Pudding and wearing our wilting and slightly torn Christmas cracker hats. It's time for Doctor Who. It's time for Last Christmas.

Yes, they can be twee. But it is Christmas Day. If we can't all go a little soft-hearted for one day of the year, then what I demand is the point of anything. Let us wallow in our own Weltschmerz and crack on.

We begin with Santa Claus. Or Father Christmas. He's crash landed on Clara's roof with a couple of snarky Elves and woken poor Clara up. She, clad only in a nightdress so appearing as a sort of female Arthur Dent, has come to find out what's going on. And from here all sorts of shenanigans occur.

There's also the four members of the base. There's Shona (Faye Marsay), Ashley (Natalie Gumede), Fiona (Maureen Beattie) and Albert (Michael Troughton). Why they are all at the base is, of course, a long story but at the base, they are and threatened by things that go face-hugging in the night, which gives us the set-up for a rather nice 'Alien' joke. All four of them are excellently played by poor Ashley has the least interesting character. Shona is another in the long line of 'almost companions'. Characters so well-played and interesting that you'd quite happily have them join the TARDIS.

This story wears its influences with pride. Indeed, there's pretty much a list of them towards the end: Alien, The Thing and Inception are the three most obvious. And you know I don't find that annoying. One of the great things about Doctor Who has been the way it takes an idea from somewhere else and Doctor Whoified it up. And Last Christmas throws all its influences together like the ingredients from what's left in my kitchen cupboard at the end of the month when money is scarce and turns it into a surprisingly delicious stew type thing.*

Anyway, there's adventure and excitement and wild stuff. But there's also tenderness and a little sadness. Clara and The Doctor reveal that they both lied to each other to make the other happy, which in the end probably hasn't made either of them happy. Clara slaps the Doctor again about which I am not happy, but it is slightly more justifiable here than it is in Into the Dalek. I still don't like it.

The scenes with Clara and Danny at 'Christmas' manage to be both rather moving and creepy at the same time. I really wish Samuel Anderson had been given more of a run as he's such a good actor, but it was not to be. Poor Danny Pink.

This might have been Jenna Coleman's last Doctor Who story, and the ending clearly could have been one thing, but she decided to stay so we have the joy of seeing the Doctor and Clara heading off out into the Universe together again. It's a happy ending to a story that flirted...no, it petted heavily...with melancholy.

I really enjoyed this one. It kept me happily occupied on the journey to work this morning. It almost made me cry on the Bakerloo Line to Waterloo, which would have been mildly embarrassing.

PS I tried not to spoil this too much. I hope it worked.

*No, that's not a metaphor - or is it a simile - that's going to take off any time soon.