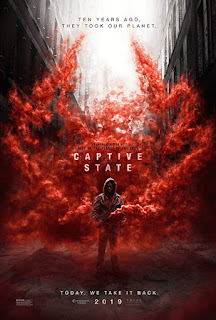 After ten years of occupation, some chose cooperation, others chose resistance. Watch the new trailer for Captive State...

Ten years ago, they took our planet. Today, we take it back.

Set in a Chicago neighbourhood nearly a decade after an occupation by an extra-terrestrial force, Captive State explores the lives on both sides of the conflicts - the collaborators and the dissidents.

PEACE, UNITY, HARMONY... You can find out more about the planet under the rule of The Legislature on the website at https://thelegislaturegov.com/captivestate/

*** UPDATE *** the above website has now been hacked by dissidents. Read the red writing, find the truth.

[gotta love these viral marketing things. As some of the comments on the YouTube trailer said, this is either going to be really, really good or really, really bad! - Ed]

Directed by Rupert Wyatt (Rise of the Planet of the Apes, The Escapist, The Gambler) from a screenplay he co-wrote with Erica Beeney, the film stars John Goodman, Vera Farmiga, Ashton Sanders and Jonathan Major. It hits big screens in the US on 29th March and UK cinemas a fortnight later on 12th April.