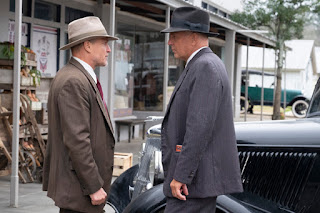 A first look image of Kevin Costner and Woody Harrelson starring in John Lee Hancock’s The Highwaymen coming to Netflix in March....

The outlaws made headlines. The lawmen made history. The Highwaymen follows the untold true story of the legendary detectives who brought down Bonnie and Clyde. When the full force of the FBI and the latest forensic technology aren’t enough to capture the nation’s most notorious criminals, two former Texas Rangers, Frank Hamer and Maney Gault (Kevin Costner and Woody Harrelson) must rely on their gut instincts and old school skills to get the job done.

The film was allegedly originally set up as a collaboration between Robert Redford and Paul Newman, but due to Newman's death in 2008, Redford left the project. Then in 2013, Woody Harrelson was set to star alongside Liam Neeson, but Neeson left the project, and was replaced by Kevin Costner. Now, directed by John Lee Hancock from a script he wrote with John Fusco and Scott Frank, the cast also includes Kathy Bates, John Carroll Lynch, Kim Dickens, Thomas Mann, and William Sadler.

The Highwaymen comes to Netflix around the world on 29th March 2019.

Find out more from www.netflix.com/thehighwaymen
Email ThisBlogThis!Share to TwitterShare to Facebook