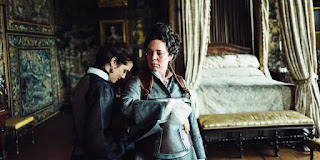 The Favourite is again the favourite as the nominations for the London Critics’ Circle Film Awards got announced yesterday...

The film picked up 10 nominations, including one for Film of the Year, Screenwriter of the Year and Director of the Year. Olivia Colman and Rachel Weisz also got nods for their roles in the film.

After The Favourite, the next most nominated films are Pawel Pawlikowski’s Cold War, Rupert Everett’s The Happy Prince, Alfonso Cuarón’s Roma and Lynne Ramsay’s You Were Never Really Here, each of which earned five nominations, but the biggest surprise of the whole list of nominations is the fact that Golden Globe favourite A Star Is Born didn't get anything.

“Because our critics see almost everything that’s released, they nominated more than 180 titles in the Film of the Year category alone,” says Awards Chair Rich Cline. “Our members have gone against expectations this year in their voting, so our list of nominees is very distinctive in the current awards season, including selecting two women for best director and honouring some performances that other groups are overlooking. With such a wide range of titles on the ballots, getting a nomination is a real achievement.”

Other mentions that we were excited to see include First Reformed being up for 3 awards, alongside a very strong field for Actor of the Year and mentions for Suspiria and Mission Impossible: Fallout in the technical category.

As well as the nominations, Spanish film-maker Pedro Almodóvar has been announced as the recipient of The Dilys Powell Award for Excellence in Film. In response, Almodóvar said, “I have had a wonderful history with the London critics, and am thrilled to receive this special honour. I look forward to visiting London in January for the ceremony.”

Presented by Dover Street Entertainment, the Awards ceremony will be held at The May Fair Hotel on 20th January.

FILM OF THE YEAR

FOREIGN-LANGUAGE FILM OF THE YEAR

DOCUMENTARY OF THE YEAR

BRITISH/IRISH FILM OF THE YEAR: The Attenborough Award

DIRECTOR OF THE YEAR

SCREENWRITER OF THE YEAR

ACTRESS OF THE YEAR

ACTOR OF THE YEAR

SUPPORTING ACTRESS OF THE YEAR

SUPPORTING ACTOR OF THE YEAR

BRITISH/IRISH ACTRESS OF THE YEAR

BRITISH/IRISH ACTOR OF THE YEAR

YOUNG BRITISH/IRISH PERFORMER OF THE YEAR

THE DILYS POWELL AWARD for EXCELLENCE IN FILM