Film - Mowgli: Legend of the Jungle 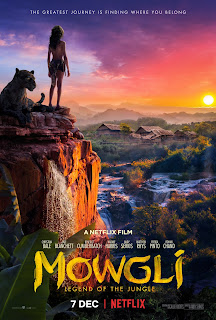 A far cry from the all singing, all dancing Disney animation, a new clip from Mowgli: Legend of the Jungle gives you "Just a Little Taste" of the darker edge of the film, now on Netflix...

Performance Capture and live-action are blended to riveting effect in Mowgli: Legend of the Jungle, a dramatic new adaptation of Rudyard Kipling’s beloved classic The Jungle Book from acclaimed actor and director Andy Serkis.

The story follows the upbringing of the human child Mowgli, raised by a wolf pack in the jungles of India. As he learns the often harsh rules of the jungle, under the tutelage of a bear named Baloo and a panther named Bagheera, Mowgli becomes accepted by the animals of the jungle as one of their own. All but one: the fearsome tiger Shere Khan. But there may be even greater dangers ahead, as Mowgli comes face to face with his human origins.

Torn between two worlds, that of the jungle and that of humankind, Mowgli must navigate the inherent dangers in each as he embarks on a journey to discover who he really is in this visually spectacular and emotionally moving adventure.

On the human side, Matthew Rhys (The Post) is Lockwood; Freida Pinto (Knight of Cups) is Messua; and young actor Rohan Chand (The Hundred-Foot Journey, Bad Words) plays Mowgli, the boy raised by wolves.

Mowgli: Legend of the Jungle is produced by Steve Kloves (Fantastic Beasts and Where to Find Them), Jonathan Cavendish (Breathe, Bridget Jones’ Diary), and David Barron (the Harry Potter films), with Nikki Penny serving as executive producer. The screenplay is by Kloves’ daughter, Callie Kloves.