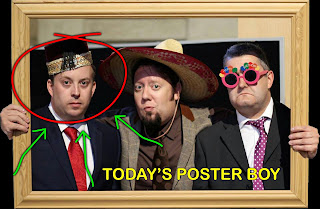 In the run-up to Christmas, our own version of The Three Wise Men reveal five of the classic film posters that have adorned their bedroom walls down the years. Today's Poster Boy is Robert Barton-Ancliffe... 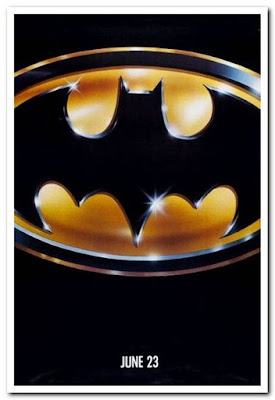 Summer 1989 and anticipation for the first Batman film since the 1960s was reaching fever pitch, all thanks to one deceptively simple idea.

Tim Burton’s Batman had faced an uphill struggle from the start. Finally emerging from development hell with a relatively unknown director, a leading many whom many had written off as the antithesis of the character’s brooding machismo, and memories of the campy Adam West incarnation still lingering, it’s fair to say that even open minded young fourth graders such as yours truly were unsure what to make of this early pre-internet hearsay. Don’t forget, although it always had its die-hard fans, the Adam West era Batman had yet to experience the critical re-appraisal of recent times and was still largely considered a slightly embarrassing curiosity from a simpler time, one which made it difficult to imagine (at least to the non-comic reading general public) how the character himself could ever be portrayed in a serious, nay credible fashion.

But while the movie itself would go on to prove even the most ardent naysayer wrong and turn into a global phenomenon, it nevertheless owed its initial success to a marketing campaign which saw the ubiquitous yet simple imagery of the shiny new Bat-symbol plastered everywhere in Spring 1989, from bus stops to t-shirts to lunch boxes, even a Topps Trading Card Series that hoovered up my allowance money for several months. This symbol managed to convey everything about the filmmaker’s intent while cleverly avoiding the thorny issues of casting, story and music that had proved cause for concern.

Time Burton’s Batman was a bold re-invention not just of Batman, but of comic book movies in general, one which was both simple, yet unforgettable, and nowhere is this as strikingly obvious than in Anton Furst’s stunning teaser poster. 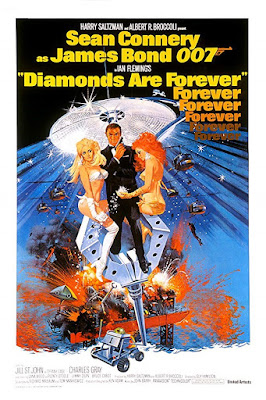 Despite Diamonds Are Forever’s arguable status as Sean Connery’s least popular entry into the James Bond Franchise, the stunning poster from Robert McGinnis is one of the most visually striking in the whole series. This is possibly the reason that this boy’s mother was able to find a copy with relative ease (most likely in Woolworths) to adorn his dorm room wall in the mid-90s.

The film does have an irresistible charm, being a tonal 180 from the previous entry in the series, 1969’s On Her Majesty’s Secret Service and signalling a wry, if slightly cynical take on the character from a returning Mr Connery, deftly paving the way for the Roger Moore era.

While not as exhilarating in the action stakes as the Bond Franchise at full throttle, Diamonds Are Forever is a playful film that is at times gleefully absurd and serves up many of the franchise’s most familiar tropes, such as gadgets, girls one-liners which were already verging on full blown cliché, without apology. Essentially, it’s a Connery Bond Film for those who prefer the Roger Moore era, with a little something for everyone.

The poster too has it all, diamonds, ‘splosions, lovely ladies, a wacky moonbuggy and there at the centre of it all, Mr Bond, as ever taking it all in his stride, cool as a cucumber in a vodka martini. McGinnis had an unmatched flair for colour and composition and it coalesces perfectly here in a piece of art that tells you everything you need to know about the latest 007 adventure. Accept no substitutes. 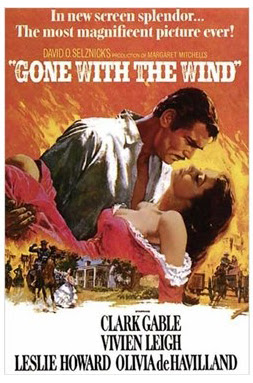 Gone with the Wind

Be prepared to be both shocked and amazed, or quite probably indifferent at the revelation that the writer of this piece has never seen Gone with the Wind in its entirety, despite the film’s status as a cinematic colossus.

This has nothing to do with either the film’s oft discussed historical difficulty (i.e. its romanticised depiction of life in the Confederate States), or even a lack of interest on this writer’s part. The question is, why sit and watch for four hours when the film’s key beats already feel so familiar? Through cultural osmosis, anyone with even a passing interest in cinema must feel well acquainted with Gone with the Wind’s highlights already, vis the spectacular visual effects on display as Atlanta burns or Rhett Butler’s withering parting words to Scarlett O’Hara with ‘Frankly my Dear, I don’t give a damn. ‘

This poster, designed by Tom Jung, painted by Howard Terpning and produced for the 1967 re-release, is an arresting spectacle in itself, with romance, action and tragedy all neatly encapsulated in a classic one sheet that has become the film’s enduring image. Interestingly, Jung would later be tapped by 20th Century Fox to design the original poster for Star Wars, however it is the poster for that film’s sequel, The Empire Strikes Back, painted by Roger Kastel that pays the most obvious homage to Gone with the Wind.

But why this poster you ask? Let’s just say that it has played its part in another epic love story, as a framed copy of Jung & Terpning’s masterpiece just happens to be hanging on your truly’s bedroom wall at this very moment, courtesy of my fiancée, who unlike me, has watched Gone with the Wind in its entirety. It’s rather good apparently. 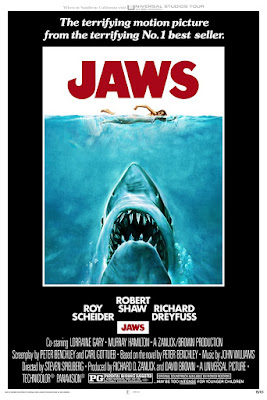 Speaking of artist Roger Kastel, The Empire Strikes back was far from his first iconic poster, though once again, his striking artwork for Jaws takes inspiration from another source, this time, illustrator Paul Bacon, who drew the original cover artwork for Peter Benchley’s novel of the same name.

But just as rookie director Steven Spielberg brought Benchley’s tense prose to vivid and exhilarating life, so too does Kastel use Bacon’s simple black and white image to create a whole new beast, a deceptively simple image full of menace, ferocity and motion, that as with the teaser for Tim Burton’s Batman, tells you everything you need to know while betraying none of the film’s twists and turns.

The limited palette conveys the stark emptiness of the ocean, with the bulk of the image given over to the menace beneath the waves, the singular human, almost incidental, a mere prop in our titular hero’s story. The teeth, the hint of the empty black eyes the ironic sense of claustrophobia; this poster is actually evocative and scary enough that it has never adorned this writer’s walls for too long at a time before being rolled up and hidden away again. Much like Spielberg’s sparing use of the shark in the film itself, this poster only needs to be glimpsed to linger long in the viewer’s imagination. 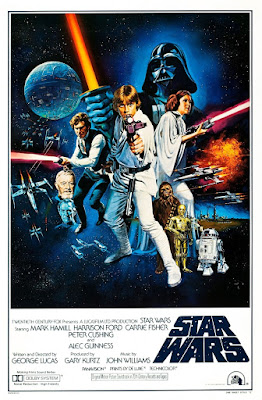 Star Wars, though always a cultural phenomenon, was once a far more simple pleasure that the ubiquitous behemoth of today’s Disney owned franchise.

George Lucas’ third feature film as director, Star Wars (as the original film was first called) was once a singular experience, with no toys, no expanded universe and not even a sequel to speak of and this poster is the perfect summation of the original cinema going experience, describing a simple tale of good versus evil, with lasers and explosions adding to the magic.

As with the original cut of the film, the poster is a near perfect example of a true pre Photoshop work of art, a product of human ingenuity, effort and passion. The visible brush strokes and small inconsistencies with details from the film itself wonderfully evoke the piece’s genesis in the late analogue age, and this is one of the reason’s that purist fans have long clamoured for a high definition release of the original cut of the film, free from CGI mattes and embellishments which in some ways rob the experience of its true wow factor. Star Wars posters have always adorned this writer’s walls in one form or another, but as a companion to the original film, nowhere is the bombast, magic and charm of George Lucas’s universe more beautifully expressed than in artist Tom Chantrell’s style C one sheet.