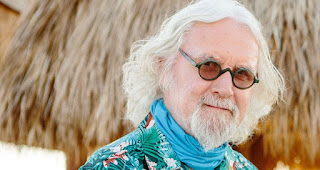 The Big Yin takes a big retrospective journey through all of his travels in Billy Connolly’s Ultimate World Tour, a one hour special coming to ITV on 13th December. Find out more...

“I’ve been to some magical places, met some wonderful people and had a great time – so relax, get yourself some space on the couch, open up the popcorn and get ready. Welcome to the ultimate world tour.” – Billy Connolly

Billy Connolly’s career has taken him to almost every corner of the globe and now, in this brand new one-off special for ITV, he takes viewers on a fresh trip around his new home state of Florida, stopping along the way to look back at his travels across the planet over the last 25 years.

Surprises are around every corner, as he tours Florida in his convertible classic car, fishing on the salt flats, tasting weird and wonderful food in the bars and restaurants, tracking crocodiles, sailing out on the Everglades and sampling the unique culture in Miami, he remembers some highlights from tours to countries including Scotland, Canada and Australia.

Billy said “It was exactly 25 years ago that I found myself taking the cameras out of the theatres and into the world. It’s a journey that’s taken me to far flung places and offered up once-in-a-lifetime experiences and I’m still discovering thrilling new stuff around every corner now I’ve pitched up in Florida.”

Billy goes fly-fishing with his old friend Will Benson in the crystal clear peaceful waters off the Florida Keys. As they fish, he looks back at fishing in Scotland and Canada and says he’s never actually managed to catch a fish on film.

As they attempt to catch something this time, Billy and Will laugh at his ability to see things in the clouds. “We’ve seen Mickey Mouse and Elvis Presley," said Billy. "There’s a world of entertainment up there. As a matter of fact, I learned once how to get rid of clouds by staring at them. I know it sounds remarkably stupid, the only other person I know who knows about them is Paul McCartney. You select a cloud and stare at it and dissolve it.”

During the programme, Billy reflects on his early career as a welder and the fondness it has given him for engineering achievements as he visits the remains of the Bahia Honda Rail Bridge in Florida - and looks back at his trip to the Angel of the North several years ago.

He also meets up with a local crocodile wrangler to check on a croc living in someone’s back garden and remembers his time feeding the creatures in an Australian river.

Billy laughs as he talks about the people of Key West declaring independence from the USA in 1982 and renaming Key West The Conch Republic. He added, “They immediately declared war on America and almost as quickly surrendered, thereby qualifying for foreign aid, but not before they had strafed the American navy base with a bi-plane full of Cuban bread rolls and conch fritters.”

Billy also talks about filming in Scotland and standing on the shores of Loch Lomond, saying “I don’t like to look like a bagpiper with heather in my ears…but sometimes your love for the place just has to find a stage. I’d like to die there. It’s a weird subject to bring up, but I’m 75. I wouldn’t like to stay away forever. I’d like to be planted there eventually, in Loch Lomond.”

Billy visits a restaurant in Florida to sample fried frogs’ legs and alligator and looks back on the time he ate a mangrove worm with aborigines.

“I’ve had worse things in my mouth,” he says.

In Miami Billy hires a poet from the local library – an innovative new service they offer as part of Miami’s poetry drive in the city, which sees quotations from verse emblazoned on everything from roofs to petrol pump handles - and treats him a recital of one of his own compositions. He then reveals that whenever he has been filmed dancing naked – which has happened many times - the carol ‘I Saw Three Ships’ was the song playing in his head.

As Billy reflects on all his amazing experiences, he said “You can see all the sights in the world, you can see the Himalayas and the Taj Mahal and the Eiffel Tower and all that, but if you don’t make a friend, you haven’t really done it right. People are pretty much the same everywhere you go and fear of the foreigner is something we have to get over if the world is going to become a liveable place.

“Tolerance is the answer. From the ageing hippy.”

Produced by Indigo for ITV. Billy Connolly's Ultimate World Tour is on ITV on 13th December at 9pm.