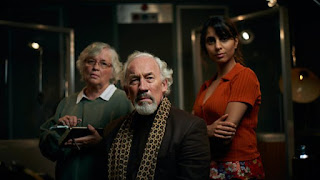 Bringing the Christmas ghost story tradition back to life with The Dead Room, a chilling new tale for Christmas Eve on BBC Four, read a short Q & A with its creator Mark Gatiss...

Written and directed by Gatiss, the 30 minute film tells the tale of a long-running radio horror series of the same name. Simon Callow plays Aubrey Judd, the radio series’ veteran presenter and national treasure, who finds that he must adapt to changing times and tastes… But whatever happened to the classic ghost stories? The good old days?

Mark Gatiss says: "The Christmas Ghost Story is a wonderful and vital TV tradition and one which has found its natural place on BBC Four. A Merry Christmas to all of you at home. Pleasant dreams!”

Simon is joined by Anjli Mohindra, Susan Penhaligon and Joshua Oakes-Rogers and the tale airs at 10pm on Christmas Eve on BBC4. 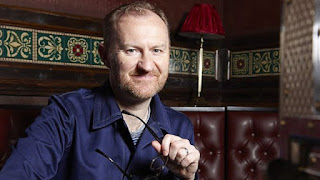 Why should viewers tune into The Dead Room?

Because everyone loves a Christmas ghost story and the lack of one is a crime. I’m very pleased with how it’s turned out and I hope it gives everyone a nice shiver on Christmas Eve (the best day of the year). Besides, if they don’t watch, I’ll haunt them…

What inspired you to write The Dead Room?

I used to be ‘The Man in Black’ for Radio 4 Extra (introducing horror stories in the great tradition of Valentine Dyall). The producer used to ask if I’d write one of the stories and I always said: "I’ll do the very last one!” It never happened but this is the result. I thought it should be about the presenter being haunted themselves and that was the germ of the idea. And the perfect title was right there. In a radio studio, there's a space called ‘the dead room’ that is insulated from extraneous noise. What better title!

How was the shoot at Maida Vale?

I set the film there and couldn’t imagine doing it anywhere else so it was a great relief when it became available. It’s like nowhere else, really. All the sadder, then, that it’s finally closing down. A place with an incredible history and a very special atmosphere. The shoot was very quick (three days) but my whole team worked so hard to make it as effective and spooky as possible.

Have you worked with the cast before? Why do you think this cast works so well for this story?

Anjli came recommended and now seems to be the busiest actor in the country! I was delighted to work with her and she brings a kind of quiet, modern authority to the part of Tara. I’ve known Simon since he played Charles Dickens in my first Doctor Who story The Unquiet Dead so we have a long shared history of hauntings! He’s a wonderful man, so full of life and talent and I wrote the part of Aubrey especially for him. He emailed me straight back and said: "This I MUST do!" He’s a professional to his fingertips and the most generous and funny of men. I’ve been a fan of Susan Penhaligon since I was a child when she was a permanent fixture of the schedules. I have very fond memories of her in Bouquet of Barbed Wire and particularly as the definitive Lucy Westenra in the excellent BBC version of Dracula (1977).

And there must be someone else in the cast… but that would be telling...

Do you believe in ghosts? Have you ever had a ghostly encounter?

I do and I don’t. I don’t believe in the afterlife or the continuation of the ‘soul’ but I think there’s something in the notion of ghosts or there wouldn’t be stories about them going back hundreds and hundreds of years. Can time replay itself? Can people leave impression of their lives? Is it quantum physics? Who knows?

I've had what I think was a sort of ghostly encounter but then I would say that, wouldn’t I?

Why do ghost stories work so well at Christmas time?

It’s an ancient tradition, something to do with being in the dark round a fireside. Dickens cemented the idea in our imaginations but there’s a very long history of them being told at this time of year. In A Winter’s Tale a character says: "A sad tale’s best for winter: I have one/Of sprites and goblins… It begins 'There was a man dwelt by a churchyard…'"

What are the elements of a good ghost story? How do you frighten people…?

M.R. James (the master of the tradition) had certain rules (which I’ve sort of dramatised in The Dead Room) but rules are meant to be broken! He was adamant that the ghost must be malevolent yet some of my favourites (by the great E.F. Benson) are very funny. But being scared is a very subjective thing. What may horrify one person won’t do a thing to another. I know what scares me and that’s what I try to put into any spooky tale I make. I owe a huge debt to the BBC ghost stories of the 70s, directed by Lawrence Gordon Clarke but, having made a very traditional M.R. James adaptation in 2013 (The Tractate Middoth) I wanted to try something a bit different. So The Dead Room is set in the present day with a very unusual ghost...

What do you want for Christmas?

Peace on Earth. And some chocolate gingers.