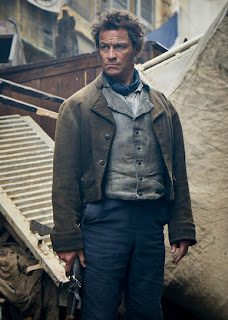 "A story of love, injustice, redemption and hope." Watch the trailer for the BBC adaptation of Victor Hugo's Les Misérables ...

In war-torn France, convict Jean Valjean and seamstress Fantine must decide their futures. Valjean’s past continues to haunt him. In Paris, Fantine meets the love of her life.

Multi award-winning screenwriter Andrew Davies goes back to the original novel for the new drama series and delve deep into the many layers of Hugo's story, revelling in Jean Valjean and Javert's cat-and-mouse relationship, against the epic backdrop of France at a time of civil unrest. With "a striking intensity and relevance" today, the novel documents the struggles of France's underclass and how far they must go to survive. The six part television adaptation of the renowned book will faithfully bring to life the vibrant and engaging characters, the spectacular and authentic imagery and, above all, the incredible story that was Hugo’s lifework.


The cast is led by Dominic West as Jean Valjean, and David Oyelowo as Javert. They are joined in the epic new event drama by Lily Collins as Fantine, Adeel Akhtar and Olivia Colman as Monsieur and Madame Thénardier, Ellie Bamber as Cosette, Josh O’Connor as Marius and Erin Kellyman as Éponine.

Watch the trailer (and no, there's no singing)