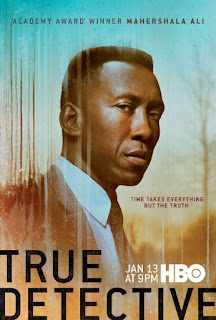 Coming to HBO in January, watch the new trailer for True Detective Season 3...

1980: Will and Julie Purcell, the children of feuding parents Tom and Lucy Purcell, go missing a week after Halloween in West Finger, Ark.

2015: Retired detective Wayne Hays, who originally investigated the crime, is asked to look back on the twists of the unsolved case with a true-crime documentary producer.


Playing out in three separate time periods, the third season tells the story of a macabre crime in the heart of the Ozarks, and a mystery that deepens over decades. Mahershala Ali (Oscar® winner for Moonlight) stars as state police detective Wayne Hays, with Stephen Dorff (Somewhere) starring as Roland West, the detective who investigated the case with Hays, and Carmen Ejogo (Selma) starring as schoolteacher and writer Amelia Reardon.

In 2015, retired detective Wayne Hays, his memory failing, looks back at the disappearance of 12-year-old Will and ten-year-old Julie Purcell, recalling the days and weeks immediately following the 1980 crime, as well as developments in 1990, when he and his former partner, Roland West, were subpoenaed after a major break in the case.

Filmed at locations throughout northwest Arkansas, the new season of True Detective was written by series creator Nic Pizzolatto, except for the fourth episode, which he wrote with David Milch (HBO’s Deadwood), and the sixth episode, which he wrote with Graham Gordy (CINEMAX’s Quarry). Pizzolatto is also making his directorial debut with two episodes; other directors are Jeremy Saulnier (Hold the Dark) and Daniel Sackheim (HBO’s Game of Thrones).


Created by Nic Pizzolatto, True Detective returns for its eight-episode third season with two episodes debuting back-to-back SUNDAY, JAN. 13 (9:00–11:00 p.m. ET/PT), exclusively on HBO, followed by single episodes subsequent Sundays at the same time. Therefore we can assume that it will be coming to the UK very shortly after that.