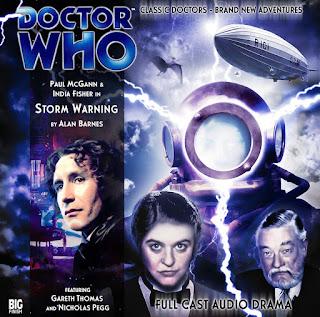 Our Doctor Who audio expert, Tony Cross, delves into the back catalogue available from the Big Finish website. Today is the Eighth Doctor and Charley adventure Storm Warning…


So, we begin the Eighth Doctor's Big Finish run with Storm Warning, released in 2001.

A tale of aliens and an airship. Specifically, the ill-fated R-101. In the real world the R-101 crashed into a French hillside on the 5 October 1930 killing 48 of the 54 people on board. It effectively bought an end to British airship development. In the Big Finish universe, the crash still happens but everyone dies. Well, not quite everyone. One, Lord Tamworth (played with a fine stentorian air by Gareth Thomas) who is off to travel the stars. The other, Charley Pollard (India Fisher) leaves to travel with the Doctor. Except she's a paradox. She should have died on the R-101.

It's a nice gentle adventure. Not brilliant, not bad. In fact, it does have the feel of a first story for a new Doctor. The story itself is less relevant that the introduction of a new incarnation. So even though the television movie introduced us to Paul McGann's Doctor this seems like his first proper adventure, even if it is audio only and lots of Doctor Who fans will never have heard it.

McGann is good again. There are similarities to David Tennant's portrayal in that he seems - at least here - to be a more human version of the Time Lord. He's certainly open about himself, spilling his secrets to Charley within minutes. It's early days yet so let's see how this pans out.

India Fisher does an excellent job with Charley Pollard as well. She's a couple of steps away from being jolly hockey sticks posh but combines brains and enthusiasm with a fine sense of adventure. She and the Eighth Doctor seem to work well together here.

The supporting cast does a good job to. I like Gareth Thomas's Lord Tamworth who is less of a pompous fool than his initial appearance leads you to suggest, although the idea of the Tamworth fighting with the Triskele's Uncreator Prime is as spectacularly odd as the fight between Patrick Moore and one of the aliens that takes place in the Independence Day UK and I'm not sure it would work in a television story but this is audio so things can be got away with.

Barnaby Edwards with South African accent makes Rathbone, the British Intelligence agent and key human bastard of the piece, pleasantly nasty but I think the script overdoes the 'in my country...' lion stories a bit. There's a hint towards the end that Rathbone is under the influence of the Uncreator Prime to explain his ruthless execution of the Triskele Lawgiver and he's given enough shades of grey to make him realistic enough. He's another in Doctor Who's long line of people who thinks the end justifies the means.

Nicholas Pegg as Frayling, the mild-mannered slightly put-upon engineer and military officer doesn't have to stretch himself too much in a part that is as thin as the membrane of the airship itself.

I like the idea of the Trikele themselves. A species split into instinct and logic taking instruction from one single Lawgiver. A species that has passed beyond the 'let's invade and kill everyone stage' and is trying to be something else. A race whose nastier side is still pretty rubbish because they're a new generation who've not had much practice with this killing stuff and whose leader, the Uncreator Prime, gets beaten up by an old-ish member of the British aristocracy.

So this does a reasonable job. We meet our new Doctor and his new companion and sow seeds for future problems by the very fact that Charley is a paradox.