Audio - Doctor Who: The Creed of the Kromon 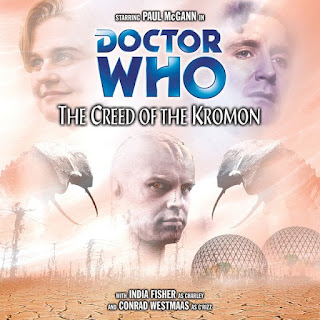 Our Doctor Who audio expert, Tony Cross, delves into the back catalogue available from the Big Finish website. Today is the Eighth Doctor and Charly adventure The Creed of the Kromon...


Phew. After the last few stories it is nice to find myself listening to something that is pretty much a bog standard Doctor Who adventure.

OK, it is set in an alt-universe and there's clearly something bigger and more mysterious going on that we're not going to find out about in short order but it is nice to be back in the vaguely ordinary. In Doctor Who terms.

This is written by Phillip Martin - who wrote 'Vengeance on Varos' and 'Mindwarp'. (He also wrote Gangsters btw, which I recommend heartily if you haven't seen it, but I am distracted). Its main villains, the Kromon, have a certain similarity with the Mentors in there rather business focused approach to the universe. Their 'Creed' is that of a large corporation with the Doctor at one point offered an office and a PA of his own as an inducement to help.

It is the comic aspects of this story that come as a bit of a relief after all the seriousness of 'Nevermind' etc. The Kromon are termites of a sort - shades of the Zarbi but alas not THE Zarbi - but a lot of their scenes are black comedy. Only the scenes with Charley as they try to transform her (again hints of Martin's work in Vengeance on Varos) are particularly dark.

Indeed it is hard not to feel sorry for Charley who gets the nasty end of the stick here. The Doctor gets pushed around, shot at, drugged and lightly tortured but that's nothing but light relief for him. Charley on the other hand gets all those things and hybridization on top, which is no way to treat a lady.

Actually now I come to think of it there is another character here who gets a rather bad time of it and that's K'rizz (Conrad Westmaas). We meet K'rizz early in the story fleeing from the Kromon. He is a Eutermesan, who are reptilian humanoids with chameleon tendencies enslaved by the Kromon. There are hints of mysteries about K'rizz too, but this wouldn't be a Big Finish story if there weren’t some hidden depths to a character. He is trying to rescue L'da, his partner. Alas she's been hybridized and poor old K'rizz must deal with the consequences, which aren't pleasant.

Conrad Westmaas breathes life into K'rizz who has one of those calming voices, even when he's fretting about whether to kill people or not. It's almost hypnotic. We'll hear more about - and of - K'rizz as he's joined the Doctor and Charley as they move on into the next zone.

There's also the matter of The Kro'ka (Stephen Perring) who is the rather pompous sounding sort of interzone passport control officer. The Kro'ka is up to something, which involves the Doctor and company but what that is we have yet to find out. In the fullness of time I'm sure all will be revealed.

Not much else to say really. But it is nice to have a story that feels like a bit of light-hearted fun - the usual death & destruction included - for a change. However, there are questions to be answered: who is the mysterious corporation; what's The Kro'ka up to and what's it got to do with the Doctor?

Next up...The Natural History of Fear and perhaps more shall be revealed?