Audio - Doctor Who: The Stones of Venice 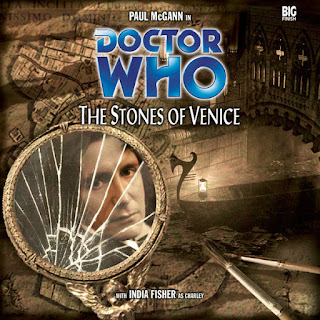 Our Doctor Who audio expert, Tony Cross, delves into the back catalogue available from the Big Finish website. Today is the Eighth Doctor and Charly adventure The Stones of Venice…


Well, that was bizarre but entertaining stuff. I'm not sure whether Gothic or Baroque is the right word to use to describe 'The Stones of Venice' but it is certainly a little odd.

Venice is dying and a Duke Orsino (Michael Sheard) who has not aged for one hundred years is expecting it to sink beneath the sea as the result of a rather nasty curse inflicting upon him by his lost beloved, Estella. Estella it seems reacted to being lost in a game of cards rather sharply. She cursed the Duke and Venice. Then died. There's a Cult in her memory, of course, led by Vincenzo (Mark Gatiss). This Cult expects Estella to rise from her tomb and bring an end to the curse. Alas, things turn out to be much more complicated than that.

Add Venice's aquatic and rebellious underclass, the Gondoliers represented for the most part by Pietro (Barnaby Edwards) and some sound effects; an art collection with one or two odd paintings in it looked after by Churchwell (Nick Scovell), the Duke's curator and the sudden arrival of the Doctor and Charley and things get complicated.

The odd atmosphere is reflected in the guest performances. Michael Sheard does a great job as Duke Orsino, a man who has lived too long and lost too much. He might even be a little mad. This was Michael Sheard's last performance in Doctor Who before his death and it is an excellent final bow. Then there's the oddly intonated Elaine Ives-Cameron as Ms Lavish, an elderly woman who turns out to have something of an interesting tale to tell. [SPOILER, I suppose] Ms Lavish it turns out is Estella and she's become a rather bitter and judgemental old thing. She's also an alien. I might hazard a guess and say that Miss Haversham from 'Great Expectations' might be an influence (based partly on the names, partly on her bitterness) but then again, I could be making two and two equal five.

Mark Gatiss' Vincenzo is portentous and rather arch. It veers dangerously towards the hammy but then if this were one of those odder horror films with Vincent Price in - like the Masque of the Red Death - you'd expect a little of that. He may also be channelling Hieronymus from 'The Masque of Mandragora'. His disappointment at the end is palpable and his dashing off, probably to form another catacomb head office cult, is nicely done.

In fact the final episode, although incredibly wordy is quite wonderful. There's a lot of ideas bantered about, a lot of issues resolved, and interesting points made about love, faith, class and what can be done to make a difference. The Doctor's line '...there's always something we can do' is made an item of faith for the 8th Doctor, which is ironic considering he's a bit sniffy about humanity's desire to mythologise everything.

India Fisher as Charley is good. She's got a bit more to do in this story as she gets separated from the Doctor and caught up in a rather bizarre plan of Pietro's, who might be the 23rd century Venetian cousin of Baldrick. Charley doesn't put up with being bullied - verbally or physically - and she gets to a nice scene towards the end when she tells Orsino off when he tells her off. She's fun to and nicely mocking of some of the Doctor's pretensions.

Paul McGann is excellent in this again. Doing a wonderful job of getting other people into trouble, especially Churchwell and Charley, before putting all the pieces back together at the end and enabling the Duke and Estella to save the day. In this the Doctor is more a catalyst than the main driver of the plot. Stuff happens. Occasionally the Doctor turns up to reduce the damage that results from that stuff.