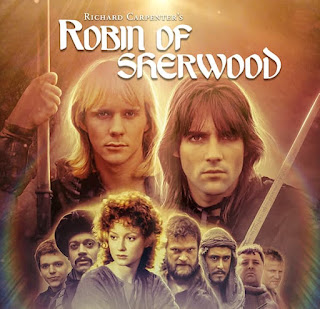 Our own hooded man, Steve Taylor-Bryant, descends from his own darkened forest to pay his taxes to the outlaws known as Spiteful Puppet as he reviews the latest collection of audio adventures all about Robin of Sherwood...

There’s been a fair bit of Robin Hood in popular culture over the years. My older children loved the Jonas Armstrong Robin Hood television series a few years ago that, despite being set and dressed for the right period, to me felt too modern. Everyone remembers Prince of Thieves but not even a sublime turn by a spoon wielding Alan Rickman can convince me it’s an authentic take on the Robin Hood myth. The Russell Crowe version is practically unwatchable and, yes I know, I’m famous for not liking Ridley Scott films but, come on, that was awful. The latest version on the big screen, starring Taron Egerton, left me cold and so it’s back to Robin of Sherwood I always go. There was something magical about that show, maybe it’s because I was a child and that is the version I grew up with but, honestly, I think it’s because it’s never been done better, and its cancellation should be classed as a criminal act. A couple of years ago a crowdfunded version of the show was brought back on audio, Knights of the Apocalypse, and that alone should have been incentive enough for ITV to bring it back, but no that was it. My heart yearned for my childhood but alas I was left wanting. Until now! Spiteful Puppet alongside ITV Studios have released a new four-episode audio set with returning cast members and some very able stand ins. Will my childhood dreams be realised? Or will I be dissatisfied and must admit that Robin Hood just isn’t as good as when I were a lad? Let’s listen, shall we?

First up is King of Sherwood by Paul Birch and Barnaby Eaton-Jones and it’s set during the era of series one of the shows. A full cast is required for this story and that, of course, leads to much excited noises coming from my office as Michael Praed’s dulcet tones as Robin fill my ear holes with utter joy. It’s a great story that Birch and Eaton-Jones have written that asks questions of Robin and his Merry Men. Is what they are doing right? Are they actually helping anybody? What are the differences between them and hoodlums (hoodlums, get it? Hood? I’m wasted on you lot) and this is starkly asked during the first scene with a standoff between Praed’s Robin and Will Scarlet (due to scheduling issues played here by John Culshaw instead of Ray Winstone). After so many years away from this wonderful cast and a shorter format to tell a story, Knights of the Apocalypse was feature length, I worried that my love for the show would have dwindled or that a new generation of writers would fail to live up to Kip Carpenter’s huge legacy. However, I needn’t have fretted, because the cast don’t miss a beat and sound like they’d never been apart and the writers are a credit to what Kip created, delivering a deep moral tale within a great reminder of how action TV used to be, but just in audio. I say just in audio but on my second run through the disc I was sat alone in my car and once the Clannad theme tune had finished after the opening scene I shut my eyes and easily visualised the episode. I was transported back to happy evenings in front of the television with my family. Honestly? I felt lucky to be listening, honoured to be a fan, and more contented than I have felt in a long time.

By the time you get to the second story, The Trial of Little John by Tony Lee which is set during the second series, you are back in familiar surroundings, the cast are your friends, you can smell Sherwood Forest, and any apprehension you had has long since dissipated. Tony Lee has written a glorious story that would have been more than deserving of an episode in the real show back then and, like Birch and Eaton-Jones before him, should be commended on mixing his obvious delight and excitement in being involved with such a project with an obvious skill as a storyteller. In this story Lee has gone beyond the heroic acts perpetrated by the gang and delved deep into the repercussions of their actions, dealing with loss, guilt, and the mental impact on Robin and his band but in a way that doesn’t feel like your therapist’s couch. No, this plays out as a really exciting story that just happens to have deep and meaningful connotations.

Story three reintroduces Jason Connery in Iain Meadows' What Was Lost Parts I & II and gives us as fans a real look at what could have been should ITV not cruelly have cancelled Robin of Sherwood in its prime. What Was Lost, set before Knights of the Apocalypse, could have, nay should have been the story that launched a brand-new series four. Whilst the story is brilliant, elegant even, and its wonderful for Jason Connery to join the party in my head, I cant help but be a little sad that this isn’t television, that this isn’t what we deserved back in the 1980’s. I am not familiar with Meadows as a writer but I feel I should be, and I will be searching out materials with his name attached but doubt I’ll find anything written with the sheer class that What Was Lost contains. This is compelling listening that should have been compelling television.

The collection finishes with The Meeting Place written by Jennifer Ash from a story idea by Barnaby Eaton-Jones and is like a wonderful dessert after a fine meal. In fact that rather clumsy metaphor sums up my feelings about the entirety of Robin of Sherwood: The Audio Adventures in that what I received was a banquet, some of the finest morsels that can be offered to a man, and whilst the runtime of this elegant feast might read 4 hours and 26 minutes I can tell you it flew by and is not long enough. Knights of the Apocalypse showed there was an audience for more Robin of Sherwood, and I am positive that The Audio Adventures will continue the growing fanbase and hopefully the good chaps at Spiteful Puppet and ITV Studios will hand over more ready cash for more audio adventures to be made because I am stunned at the high quality entertainment I have received through just my ears. 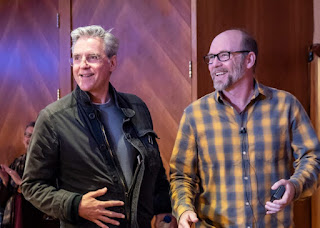 All eyes may be on Connery and Praed returning to their iconic roles, but the entirety of the cast needs a mention. Judie Trott as Marion is as enchanting now as she was back then, Clive Mantle was a personal highlight to listen to and the most vivid of my visual dream along, Mark Ryan’s Nasir and Phil Rose as Tuck evoked many childhood memories, Peter Llewellyn Williams as Much was brilliant and Jon Culshaw standing in for Ray Winstone was great, it took a while for me to realise it was Culshaw rather than Big Ray because this was an honouring of the character rather than a Dead Ringers parody and kudos to Culshaw for striking that fine balance. Nickolas Grace returning as the Sheriff of Nottingham was a joy to behold and his smart snarling honestly puts any memories of Alan Rickman to bed, he is full of evil but still very classy and I may be a little in love with him. With some of the original cast sadly no longer with us it was up to other fine actors to step into some rather large shoes and I must say I was impressed by both Daniel Abineri replacing his father as Herne the Hunter and Freddie Fox managing to replace to irreplaceable Robert Addie as Sir Guy of Gisburne.

There’s a theory that film and television aren’t really an actors' medium as they don’t get to perform long enough in each scene like they would a play in the theatre and I never really thought about it until I listened to these fabulous audio adventures. Because there’s no cameras to worry about, because the actors don’t have to hit a mark or look a certain way in a certain light there seems to be a freedom in their performance. Even as grown man I love re-watching the original Robin of Sherwood series, but never did I get the emotional performance I seem to get here, the stories on the show whilst excellent don’t seem to have the depth that these particular audio stories do. I’m only guessing of course because I’ve never acted but the cast this time around seem to excel in the freedom of performance and in letting just their voices drive the characters. There is a more nuanced edge to all of them it seems to me and whilst I dream of a proper Robin Hood experience on my screen, I’m now fearful that no visual medium will ever top the incredibly well-crafted storytelling you get with Robin of Sherwood: The Audio Adventures. I urge you to buy the collection, if you are a fan of Robin Hood in general you will love these four stories so much. If you are of a certain age and still obsessed with the television show it’s like journeying to your happy place and if you don’t audibly squeal when Albion is first mentioned maybe you’re dead inside. What it won’t do is settle any question you may have as to "who is better, Praed or Connery" and that’s fine, I love them both.

Order your copy of Robin of Sherwood: The Audio Adventures here.