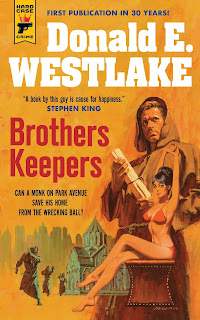 What will a group of monks do when their two-century-old monastery in New York City is threatened with demolition to make room for a new high-rise? Anything they have to. “Thou Shalt Not Steal” is only the first of the Commandments to be broken as the saintly face off against the unscrupulous over that most sacred of relics, a Park Avenue address.

Returning to bookstores for the first time in three decades, BROTHERS KEEPERS offers not only a master class in comedy from one of the most beloved mystery writers of all time but also a surprisingly heartfelt meditation on loss, temptation, and how we treat our fellow man.

It’s that last sentence from the book blurb that I got most of from reading Brothers Keepers. This, for my shame, is only my second read of a Westlake book, the first being the one that was nearly a Bond script, Forever and a Death (review here) but, from both, alongside the fantastically written action and humour, often coming across as accidental comedy rather than comedic text, there was an author who was uncomfortable with the hatred that can be contained within one human being. Within the pages of Brothers Keepers there is real humanity, real struggle, and lots of contemplation, all of which read as well rounded characters, which you could maybe argue needed a more serious story to be placed in. However, in inventing an order of Monks and putting them in a real city centre monastery, challenging them with modern issues and a capitalist society, Westlake has created a situational comedy masquerading as a thriller and this just raises the enjoyment for the reader.

I’m sorry I left it so late in life to discover Donald E. Westlake because he writes great capers and Brothers Keepers comes across as a great caper but with a deep human heart. An excellent edition to the Hard Case Crime family and, after being out of print for three decades, it’ll be a great way to introduce a new generation of fans to a great storyteller.