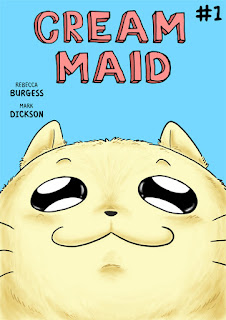 With the comic’s print run being crowdfunded shortly, Susan Omand gets a sneaky preview read of Cream Maid #1 by Mark Dickson and Rebecca Burgess...

“This comic could be in Japanese for all that I can understand it!”

That was my initial conclusion after the first reading of Cream Maid #1. But then I realised something – it’s not “could” it’s “should!” This comic SHOULD be treated in the same way as some of the more colourful and child-friendly Manga and Anime out there because that’s really the only way to explain the batshit craziness of the story and the great look of the main character. Cream Maid is described as “an anthropomorphic, ‘cat-adjacent’ disaster-magnet,” so it’s a cat-analogue then? Or a Cat-alogue?! [No. Just no – Ed] and is drawn by Rebecca Burgess in a style that reminded me a lot of Totoro et al which made them very relatable (and merch-able!). And I use the pronoun “them” deliberately because that’s how the comic refers to Cream Maid – there is no gender inferred at all. The comic creators could have jumped on a bandwagon and made a much bigger deal about this neutrality than they did in the story and I very much applaud the fact that they didn’t. Normalising gender neutrality only happens when it is treated as a normal thing and this comic does that so well.* 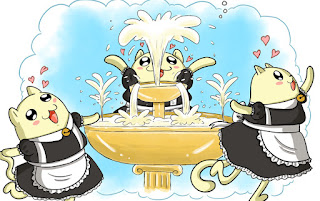 Anyway, Cream Maid is employed in a very posh mansion house to, yes, serve the cream at the dining table, having got the job “because of the adorable maid’s outfit” rather than because of any skill or experience. So, when the Lord of the Manor discovers how… um… not maid-like Cream Maid is, they get fired and sent away until they learn how to make friends. The rest of the story shows Cream Maid trying to make friends in various situations until they discover that a friend has come to find them.

It took a while, and the aforementioned change of approach, for me to start to understand where the surreal humour for Cream Maid was coming from but, once I did, it turned into a morally astute, fun-for-all-ages little comic with a strong, if strange, lead character whose heart is in just the right place to melt everyone else’s.

Oh, and let the record show that when the creators come out with Japanese-style plushy Cream Maid toys as part of the Kickstarter campaign, it was my idea ok?


*Yes I realise that, by mentioning that it isn’t a thing here, I’ve made it into a thing here, but you know what I’m trying to get at.