Documentary - An Officer & His Holiness 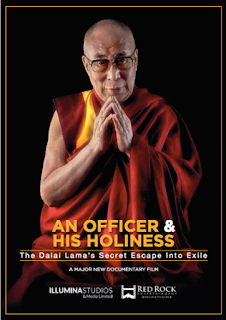 An Officer & His Holiness, a new documentary about the Dalai Lama's escape into exile, is coming to cinemas this Autumn to celebrate World Kindness Day...

Tenzin Gyatso is the 14th Dalai Lama, the head monk of Tibetan Buddhism, a role which traditionally had been responsible for the governing of Tibet, until the Chinese government took control in 1959. Before 1959, his official residence was Potala Palace in Lhasa, the capital of Tibet.  Now he is still the most wanted man in China.

Sixty years on from his escape, The Dalai Lama's incredible story will finally be told. Told in his own words on film, the documentary reveals how, in 1959, His Holiness the Dalai Lama fled from Tibet into India on foot over the Himalayas. It was a perilous trek which took 13 days, with the Dalai Lama only able to travel at night to evade detection. This critical part of the story has never been told in detail before; There was an Indian official who located him at the Chinese border and smuggled him across the harsh and perilous terrain of the Himalayas to safety in the Indian plains.

The story is told through exclusive access to the Dalai Lama and the previously unknown private diary of the Indian high official who led him to safety, Har Mandar Singh. Written and presented by Rani Singh, senior reporter with the BBC and niece of Har Mandar Singh, the documentary is narrated by Joanna Lumley and features music by Anoushka Shankar, daughter of the guru Ravi Shankar.