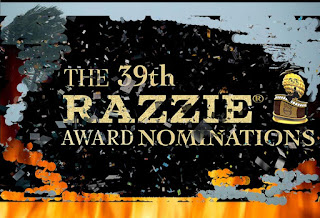 With the Oscar nominations happening today, yesterday saw the traditional unveiling of the film award nominations nobody (except Dwayne 'The Rock' Johnson) is proud of, yes, it's The Razzies...

For once, The Favourite is NOT a favourite in a film awards nominations list! Although the acknowledged National Treasures of British film do not get off scot-free as Dame Helen Mirren is on the Worst Actress list for her part in the horror film Winchester, which also gets a nod in the (un)coveted Worst Picture award. But that film can thank its lucky stars that it only has 4 nominations (the other two being for Worst Director and Worst Screenplay) as no fewer than FOUR films tie for the top/bottom spot of getting 6 nominations - Gotti, Holmes & Watson, Death of a Nation and The Happytime Murders.

It's comforting in a way that a John Travolta flick (Gotti this time) makes the grade again, in what is fast becoming somewhat of a Razzie tradition, as is the general lambasting of Johnny Depp's "unconventional" film choices and the new tradition of the appearance of Melissa McCarthy - this time being nominated for Worst Actress in TWO different films - now that's a talent. Also those Muppet sex scenes in The Happytime Murders? What were they thinking?! Talking of  muppet sex, it is surprising that the finale of the Fifty Shades trilogy only got three nominations. I guess that shows the calibre of the films that got more...

The "winners" of this year's Razzie Awards will be announced on 23rd February, the day before the Oscars and, without further ado,

"With a stumbling stock market, a possible impending Presidential impeachment, raging wild fires, devastating floods, mass shootings and a litany of plagues that reached near Biblical proportions, 2018 was a year overfull with disasters..." 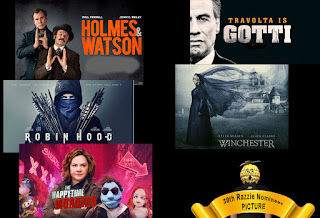 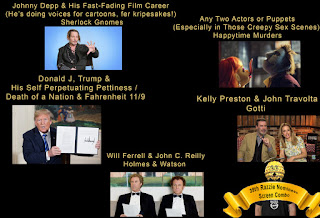