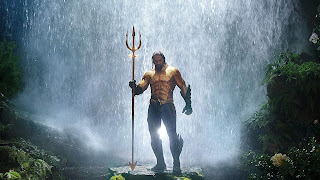 Steve Taylor-Bryant dons his swimming trunks and dives into the ocean in search of Aquaman. Is it any good? Read Steve's thoughts below, just know it's better than the mental image of Steve in his trunks...

Once home to the most advanced civilization on Earth, the city of Atlantis is now an underwater kingdom ruled by the power-hungry King Orm. With a vast army at his disposal, Orm plans to conquer the remaining oceanic people -- and then the surface world. Standing in his way is Aquaman, Orm's half-human, half-Atlantean brother and true heir to the throne. With help from royal counselor Vulko, Aquaman must retrieve the legendary Trident of Atlan and embrace his destiny as protector of the deep.

I was feeling a little sorry for James Wan back when the news broke that he would helm Aquaman. How on earth do you make an underwater film that looks good? How do you please the half of the fanbase that liked what Zach Snyder was building within the DC Universe, but also appease those who didn’t like the gritty take on their favourite comic book heroes? How do you get past that stupid water dispersion issue from Justice League when characters want to communicate underwater? How do you get over the fact that whether we like or dislike the DC output so far, we are all in agreement that the CGI monsters and Gods we’ve been served up so far have been horrifically executed? Then I thought to myself ‘You’ve waited since you were seven years old for even an attempt at Aquaman onscreen dude, lighten up and go see what it is like’.

James Wan, we know, is a creative genius within the horror genre.  When it comes to big blockbuster entertainment he has given us Fast and Furious 7, which came with its own issues due to the sad death of Paul Walker, but showed enough that Warner Bros. could trust him to take on the almost impossible task of bringing Arthur Curry’s story to the screen. What he delivered went beyond an origin tale, went beyond the conventional superhero story and, bar a couple of issues, was almost an old-fashioned quest movie in the vein of an Indiana Jones. The worlds he set up underwater were incredible, some of the best green-screen technology ever committed to screen, with a great use of existing sea creature look with horror-based fare and the mix of ancient ruin and neon reinvention just worked so well adding something intriguing to both. Despite all the underwater action, it was the trek through the Sahara and the hidden cavern under the sand dunes that gave me the most joy, adding an element of story I wasn’t expecting from a supposed ocean-going film. And it’s the story that pleases throughout. It is, yes, another superhero origin tale and we are maybe a little fatigued with those, but the main part of the narrative is one of family, an age-old tale of power corrupting that happens to include the modern issue of human pollution. It is a story of reluctance, of bravery, of confronting something new and learning to adapt and change, and it is all done with a cast that buy into what Wan wants from them and deliver everything but without ever losing that comical light touch that Aquaman had introduced during Justice League.

Jason Momoa was excellent as Arthur Curry/Aquaman and performed like a guy that is just so happy in his job. If he felt the weight of expectation from a rabid fanbase it didn’t show on screen and I could watch him wisecrack, play dumb, and fight all day long. Amber Heard was another that impressed, I am not that familiar with her work so wasn’t sure of her credentials when it comes to being a main character in a huge tentpole movie but she literally kicked ass and was the perfect foil for the way Momoa played Arthur. There seemed to be a chemistry there that was natural and in no way forced and the film benefitted for it. Patrick Wilson as King Orm had a suitable menace about him, and his reasoning for attacking the human population for what they are doing to the seas seemed justified and made me as a viewer question whether he was all bad. The back up cast of Temuera Morrison as Tom Curry, Arthur’s dad, Dolph Lundgren as King Nereus, and a wonderfully understated performance from Willem Dafoe as Vulko all helped tie the piece together and prevented the scope of it from growing out of control. Yahya Abdul-Mateen II as Manta, despite not being the main villain of the film gave me goosebumps and hopefully we’ll see more of him in any sequels now the origin of his issues with Aquaman have been established.

There were a few decisions that didn’t work for me, but none were too big that it ruined my experience. As my good pal Chris Orr mentioned, once King Orm starts emptying the seabed onto the land where are the rest of the Justice League to ask Arthur if he needs a hand? A point well made given that the main story happens after the Justice League have been established and that Orm’s issue is a global one, and that gripe makes sense but is maybe a bit picky. The other decision I couldn’t get my head around was the casting of Nicole Kidman. At no point in her appearance did I get the feeling that she wanted to be there, her performance was very stilted and almost phoned in, and certainly not of the level you expect from someone who is undoubtedly one the most talented people of my generation to grace the screen. As Atlanna, Kidman to me came across like the project was beneath her which, when you consider Julie Andrews had a blast playing a sea monster, seemed odd. Maybe Kidman was asked to act like she had no talent, perhaps the character called for her to look like she was frightened to be in front of the character, I am not privy to those aesthetic choices, but less Kidman in a sequel would be pleasing.

Overall Aquaman is a colourful, batshit crazy comedy that mixes fantasy and adventure and superheroism in a way that I haven’t seen since the comics. Its certainly a strong entry into whatever DC are calling the DCU nowadays, and it gave me utter joy watching it unfold and left me wanting more after the end credit sequence. What more do you want from a film?