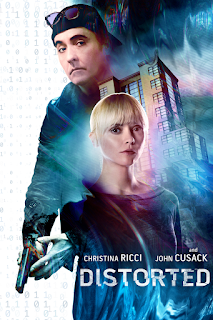 Lauren (Christina Ricci) and her husband Russell (Brendan Fletcher) move into The Pinnacle, a luxury high-rise boasting the latest design features and integrated security systems. While the couple settles into their new high-tech home, Lauren experiences a devastating delusional episode which she blames as a symptom of her bipolar disorder. It is not until Lauren is exposed to Vernon (John Cusack) an investigative journalist with an interest in cyber conspiracies, that she begins to suspect The Pinnacle may be using state-of-the-art control systems to subliminally brainwash its residents. Pitted against her friends, her psychologist and her husband, Lauren sets out on a dangerous fight to uncover the truth.

The synopsis above screams that this is my kind of film, add in the fact that John Cusack is all over the poster and I should have been sat here in my element. But I wasn’t. Don’t get me wrong, the film isn’t bad, it isn’t unwatchable, it just isn’t as good as the concept deserves and Cusack is woefully underused.

The idea of a woman suffering from mental health issues is not a new one, and the brainwashing aspects of the plot are a plotline that has been played out well over the years but in all films that include both strands of the story the casting was key, and I unfortunately just didn’t buy into Christina Ricci at all. There is proof in her back catalogue that Ricci can turn in a stunning performance when she wants to but Distorted seems to be a paycheque movie with Ricci coming across like she just isn’t bothered at all. It doesn’t stop you watching the film but it's hard to sit and enjoy a project when the lead star doesn’t look like she wants to be there.

Cusack on the other hand seems to relish the role of underground hacker come conspiracy theorist Vernon but sadly his appearances are all too brief, another example of bad marketing in setting this film up as a John Cusack movie despite the fact it really isn’t, and the film is all the worse off for Cusack not sharing enough screen time with anyone. Only the guys behind the scenes know why the casting is so unbalanced and I feel quite sorry for director Rob W. King (The Humanity Bureau) who showed signs of a very skilful filmmaker in periods of the film. Distorted is watchable but there are far better examples of the concepts contained within it out there in the world already. I’m not sure what it's going to take to get Cusack back into everyday film conversation but it wasn’t this.