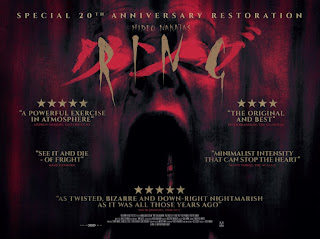 To celebrate the 20th Anniversary of Ring, a special restoration of the film will release in cinemas on 1st March 2019, then DVD and Blu-ray on 18th courtesy of Arrow Video. Here's a reminder of David Ames' thoughts on the film...

As far as horror genres go, there are a multitude of choices, all with roots in the western world. In contrast to that, much to the love of all who enjoy horror and psychological thrillers, the eastern world gives us an entirely different type of movie. Filled with allusions to a completely different and unknown history and mythical background, Asian horror movies provide western audiences with incredibly unnerving films which are nothing like we see in our own countries. One such film, the first to really make waves in America, was Hideo Nakata’s classic Ringu.

This film was the first Japanese horror movie I ever had the pleasure of watching and while it wasn’t really full of jump scares and gore like most of the horror I had seen at this point in my life, Ringu did something to me psychologically that haunted me for weeks after I first saw it.

Ringu follows single mother Reiko and her family (son and ex-husband) and she investigates the mysterious deaths of four teenagers. The friends of these teenagers believe that they were murdered by watching a haunted video tape, a local legend that Reiko is reporting on at the time. When she begins to investigate, she discovers the tape and watches it, not really believing the story. Immediately following the viewing, she receives a phone call informing her that she will die in seven days. Through her investigation, Reiko discovers that a young girl named Sadako was discovered to have ESP, like her mother, but was brutal with her powers. When her mother was killed, she escaped with her father and nothing more is known about them until the appearance of this video. I don’t want to give too much away but the film works on any number of levels, especially in the psychological department. It also has that wonderful false ending that horror fans seem to enjoy so much.

Performances in this film are understated and wonderfully done. Nanako Matsushima is Reiko and she is warm and worried and strong. She is not only classically beautiful but she also exudes a feminine power not seen in most roles of the same nature. Playing her husband, Hiroyuki Sanada as Ryuji is supportive and worried and goes to any length to protect his son and his ex-wife. Lastly, the real star is Rie Ino as Sadako Yamamura, who we only see for less than a minute but is terrifying the entire time she is on screen.

This movie is quintessentially Japanese, in that it relies on Japanese folklore and mythology to sell its monster. Luckily, the film is crafted in such a way that, even not knowing the history and folklore, the film is still jarring and infinitely successful. I feel that there is something lost in the translation and that had I been brought up in that culture the film would have been even more unsettling. That being said, this is a landmark in both Japanese horror and horror as a whole and is a must watch for anyone that enjoys psychological horror movies. Also, that EYE is so damn disturbing. You may not know what I am talking about but once you see this you will remember...