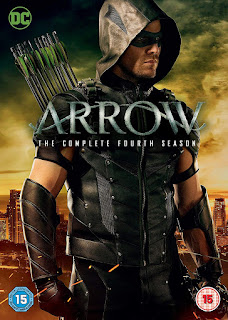 Kraig Taylor-Bryant is working his way through the Arrow TV series from the start. Here's his thoughts on Season 4 (spoilers)...

Find Kraig's thoughts on other Seasons of Arrow here.

So, this is a season that certainly wasn’t my favourite after the first watch. However, after watching it a second time I seemed to find it more enjoyable although, despite this, there were moments that still seemed to leave me scratching my head. Besides all this confusion, the series kept its usual formula of recurring themes of family deceptions and secrets in general. But what I also noticed was how much more prominent the roles of Diggle and several other female characters were and, I think, with the exception of Laurel’s portrayal of the Black Canary, this season did a great job of signifying equality in TV. I say this about Laurel’s character in particular, because the way the story makes her train independently, does help to make her not rely on others, but it doesn’t give her a reason to be as a good a fighter as maybe Speedy (Oliver’s sister) or Diggle. That may be why she still isn’t as good a fighter in this season, so it might just be down to the way the previous season went, that she isn’t as strong a hero in this season.

The overall plot of the season starts off with what remains of team Arrow going to find Oliver after they realise how much they need him to help save the city, which, as it sounds, doesn’t seem to show equality too well. I believe this to be one of the most annoying things about this season, considering that Oliver left his life as the Green Arrow behind, to be with Felicity at the end of the previous season.

So, from the viewer’s perspective, they come back right after they’ve left. I think that if Oliver were to come back, it would be better if he came back for the end of season 4 instead, when the city is in a moment of crisis, and he could come back as Oliver Queen, to give a speech that would calm everyone in the city, leading his name to be put forward to become mayor of the city. And I think from there they could shift the focus more to team Arrow but include Oliver when they need useful intel or if he must make a decision that will impact team Arrow.

Anyway, after Oliver and Felicity return, they come back to a team with a poorly styled lair, and very little info on the enemy they’ve been fighting for months, except from the fact they’re commonly known as “ghosts,” though fortunately when they are in the field, this season makes it more clear how Oliver’s friends are more important and prominent this time around. I also found it a little more satisfying that it was Felicity also who was more prominent, because she and Thea both seemed to be stronger characters this season, with both being given their own story arcs of a sort.

Felicity is given a little more of a backstory when her father comes into the fold, during the episode “Unchained”, before we found out that the mysterious “Calculator”, that team Arrow had been fighting in this episode, was in fact her father. This leads him to eventually talk to her and give her a reason as to why he left. It was this backstory that helped her become stronger, because throughout this relationship she seems mostly guarded, which is good considering that he abandoned her, and we see how this made her stronger, and more wary when she’s around him. And I think when she finds out that he was trying to steal the tech form the company she works for, she becomes even stronger, because she suffers that same loss again, because this time she knows what kind of person her father was, and in a way she’s been toughened up by it, similar to how time on the island toughened up Oliver.

I think this episode is also a clear example of family deception, which I previously mentioned as being one of the key themes of the season. The fact that the Calculator ends up being Felicity’s father makes the family deception theme fairly clear, though what makes this even more interesting is how Felicity and the Calculator end up having to work together closer to the end of the season to take down Damien Darhk. And the fact that Felicity helps to break her father out of prison, after she puts him there, makes her seem more interesting as a character because she, like her father, is willing to bend the law to do what she thinks is right, which shows that they’re not so different, and the fact that she did this despite how much Felicity’s mother despises her father. 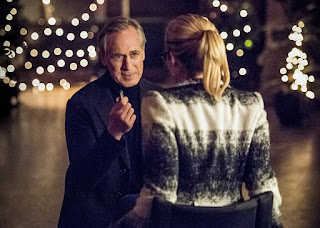 Thea also had a story of her own through the “Sins of the Father” episode. This seems to revolve around how her interaction with Damien and her bloodlust start to take their toll on her body, as her condition becomes unstable, and everyone on the team rushes to solve the feud between Nyssa al Ghul and Malcolm Merlyn, over being in charge of the League of Assassins, as well as Thea’s life. I think what makes things interesting is that both of these people do care for Thea, but it’s their obsession with power that blinds them, and I think the big difference between Malcolm and Nyssa is that Nyssa realises this and disbands the league of assassins, when Oliver chooses to fight for her and succeeds in beating Malcolm, though not by killing him.

The whole family deception theme shows itself again in this episode because Malcolm refuses to trade his role as Ra’s al Ghul of the League of Assassins for his own daughters’ life, and instead, decided to irrationally attempt to kill Nyssa, to retrieve the vial that could save her. I think this isn’t so much family deception, but it could be, in the sense that a father should be willing to trade anything to save their own daughters life, which Malcolm clearly isn’t willing to do. And I think this shows Nyssa, as the more rational one, which makes her more prominent, without making it too obvious, like a lot of films that try to do this, do these days, which is what makes this series one of the best when it comes to giving everyone equal screen time or importance to the plot.

Finally, I think Diggle’s personality takes some dark turns in this season, with the return of his brother, when he finds out he voluntarily became one of Damien’s ghosts. The season also elaborates more on the corruption of some, who are in the U.S military, and how this changed Andrew Diggle (Diggle’s brother), and his way of thinking about the world. It also creates a them of how war can change a person, because of all the suffering they both probably witnessed, and its interesting how both brothers saw things differently. With John seeing the world as needing to be saved, and Andrew seeing it as beyond saving, and that parallel is what makes their present-day interactions all the more interesting. What really closed this story off, and made it even better, was that Diggle ended up having to kill his own brother, because of the threat he posed to his current family, his wife and his child. You could even say that this is form of family deception, but it works both ways, because Andrew is betraying his brother, by trying to kill his brother’s wife and child, but, at the end, John feels like the betrayer, because he kills his own brother.

So back to the moments that I enjoyed, the most prominent ones being those with the antagonist, Damien Darhk, on screen, with his enjoyable personality. He seems to have a way of adding a comical positivity to making others suffer. Damien’s character seems to have an obvious goal from the get-go, he wants to see Star City burn. Which is like most villains that came before him, but as the season goes on, he also seems to have something bigger than just Star City in mind. He starts to show himself to be somewhat of a madman who wants to cause nuclear fallout, and leave some but keep some alive, in Damien’s own little paradise in an underground base of sorts. I think in some ways, his comical enjoyment for killing doesn’t seem to fit his desire to keep so many people safe, and he definitely doesn’t seem to be the right person to have a family, though it did make for an interesting turn of events.

I think this season has a new take on a villain, and that’s something that I struggled to see the positive side of when I first watched it. And I think I let my hatred of where Laurel’s character was going in this time cloud my judgement of how well this season seemed to give backstories to each important character. Because of this, I think this season is, in fact, definitely worth watching, because the villain, whilst being slightly confusing, (since his motives aren’t entirely clear), makes it entertaining to watch through the season, and Team Arrow develops in a whole new way. So, despite a couple things that I would have changed, this season, is in fact, one of the best, which is something I failed to see after watching this the first time.