Book -This Body's Not Big Enough for Both of Us 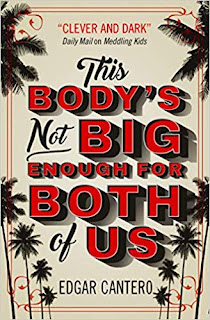 Steve Taylor-Bryant certainly isn't in two minds about his thoughts after reading This Body's Not Big Enough for Both of Us by Edgar Cantero, coming soon from Titan Books...

In a dingy office in Fisherman's Wharf, the glass panel in the door bears the names of A. Kimrean and Z. Kimrean. Private Eyes. Behind the door there is only one desk, one chair, one scrawny androgynous P.I. in a tank top and skimpy waistcoat. A.Z., as they are collectively known, are twin brother and sister. He's pure misanthropic logic, she's wild hedonistic creativity. A.Z. have been locked in mortal battle since they were in utero...which is tricky because they, very literally, share one single body. That's right. One body, two pilots. The mystery and absurdity of how Kimrean functions, and how they subvert every plotline, twist, explosion, and gunshot--and confuse every cop, neckless thug, cartel boss, ninja, and femme fatale--in the book is pure Cantero magic.

Someone is murdering the sons of the ruthless drug cartel boss known as the Lyon in the biggest baddest town in California--San Carnal. The notorious A.Z. Kimrean must go to the sin-soaked, palm-tree-lined streets of San Carnal, infiltrate the Lyon's inner circle, and find out who is targeting his heirs, and while they are at it, rescue an undercover cop in too deep, deal with a plucky young stowaway, and stop a major gang war from engulfing California. They'll face every plot device and break every rule Elmore Leonard wrote before they can crack the case, if they don't kill each other (themselves) first.

Last year I proclaimed Edgar Cantero’s Meddling Kids one of my books of the year and so the task of reviewing his next book is a nerve-wracking one since I want it to be as good as Meddling Kids was because Cantero is an entertainer as well as a great storyteller. Well, I had nothing to worry about. Cantero knocks it out of the park with This Body’s Not Big Enough for Both of Us. The book is part noir detective, part comic book, part medical marvel and part comedy. I mean, what’s not to like? The same comedic style runs throughout This Body that made Meddling Kids so encapsulating; it is an excitable child telling stories through a cynical adult's eyes and, whilst some of you may not enjoy it, it is exactly what I need to read after a hard day.

Using both genders within your main protagonist was always going to be a tall order but there didn’t seem to me, a man, to be the usual sexism you would find in a noir thriller. Whilst this most definitely is a wonderful detective story in the Raymond Chandler vein, it feels fresh and modern and, dare I say, caring which elevates it above the detective novels from a long time ago. There are some wonderful almost comic book sci-fi elements to the detective narrative and a few of the more unbelievable elements have a Douglas Adams feel to them which leads to a wonderful sense of trust in the author going further into the adventure.

Edgar Cantero is a writer who gives me joy, who entertains whilst showing himself to be a wonderful craftsman. He takes the sublime and the ridiculous ideas we had in our childhood imagination and makes them an adult reality, and long may he continue.

This Body's Not Big Enough for Both of Us by Edgar Cantero is published in paperback by Titan Books on February 19th. Pre-order your copy direct from Titan Books or through Amazon.