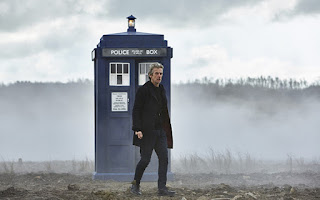 Our Doctor Who expert, Tony Cross, is journeying through all of time and space to bring us his thoughts on every available Doctor Episode. Today is the Twelfth Doctor adventures The Magician's Apprentice and The Witch's Familiar...


So, The Magician's Apprentice and The Witch's Familiar kicks off Series 9 in an entertaining style.

Firstly we find ourselves on Skaro. There's a child trapped in a field of hand mines. His life is at risk. The Doctor shows up and promises to help. Until the child tells him his name. Then, well, then the Doctor seems to do something un-Doctorish. This takes a metaphorical argument that the Doctor uses in Genesis of the Daleks and makes it a literal moral challenge.

The Doctor has apparently disappeared, which is concerning to everyone but particularly Missy who has received a Confession Dial from him. That's a bad sign from a Time Lord point of view. We find ourselves joining Missy and Clara as the zip off to 11th century England to find him.

And find him we do. He's throwing a party. With a tank, an electric guitar and some sunglasses. This is the Doctor as rock and roll star. It turns out that he's been invited to see Davros who is dying. Allegedly. Davros sent out his serpentine servant Colony Sarff (Jami Reid-Quarrell) out to find him. Colony Sarff is a fine invention and I like the way an interesting idea is bought to life. He's certainly a little creepy.

Skipping along the Doctor, Missy and Clara find themselves held on a space station about which the Doctor is suspicious, but he is taken away to meet Davros before the truth is revealed. There's a great chemistry between the three of them, but I particularly love Missy's amused contempt for Clara. who she treats like an annoying child. I don't know if I've commented much on Michelle Gomez's performance as Missy so far, but this was the story when I finally fell in love with it. She's brilliant throughout. Odd, but nasty. Funny, but cruel. And she's clever, which I like. She's not going to have rings run around her by the Doctor.

We are led nicely towards a mighty cliff-hanger with a great revelation. It's looking bad for the Doctor, but then when doesn't it. 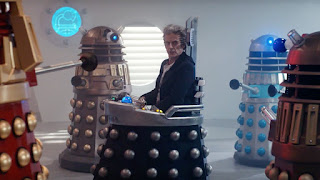 The Witch's Familiar picks up where we were. And things take a turn. The scenes between the Doctor and Davros (Julian Bleach) are brilliant. I'd go as far as to say that Bleach is the best Davros since Michael Wisher. He brings out a breadth in Davros that is sometimes missed. Their conversations feel like they've just picked up from their chat in Genesis of the Daleks, although there is an element of Alan Moore and Brian Bollard's 'Killing Joke' in there this time around.

Davros is trying to use the Doctor's compassion against him and to trap him. Everyone - The Doctor, Clara and Missy knew it was a trap - but the Doctor walks into it anyway and then flips it all around and screws Davros over. Like always. One of the problems with recurring villains in something like Doctor Who is why, once the Doctor arrives, they bother going on with their plans. They always lose. I mean if I was The Master/Missy or whoever as soon as the Doctor arrived, I'd pack my bags and go off somewhere else. I quite like the idea of a story whereupon The Doctor's arrival the Master (or whoever) decides to quit and the story shows how the Doctor thwarts even this limited ambition.

The Doctor wins, although Missy tries to stitch him up near the end in a rather unpleasant manner as is her wont. The Missy-Doctor relationship feels the more like a friendship that has gone awry than usual, although it was there with Delgado and in little bits with Simm. Missy wants the Doctor's attention and friendship again but can't help but sabotage the attempt by some act of cruelty.

It's a good start to a season that will be made up almost entirely of two-part stories, which is a brave choice from Steven Moffat. There are some wonderful performances - and I haven't raved about Capaldi much this time even though I could rave for hours about how brilliant he is. But Julian Bleach, Michelle Gomez and Jenny Coleman are equally good. The dialogue - mostly - sparkles. The different interactions between them all - in the various combinations - work wonderfully.

On a final note, there's something very Doctor Who about zombie Dalek sludge.