Documentary - Knock Down the House 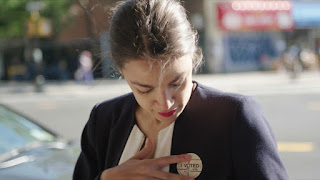 Fresh from Sundance Film Festival and heading to SXSW next month, the political documentary Knock Down the House has been acquired by Netflix...

The award-winning documentary Knock Down the House chronicles the campaigns of four female progressive candidates including Alexandria Ocasio-Cortez, against powerful incumbents in the 2018 midterm elections. The film is directed by Rachel Lears and produced by Lears, Robin Blotnick, and Sarah Olson.

When tragedy struck her family in the midst of the financial crisis, Bronx-born Alexandria Ocasio-Cortez had to work double shifts in a restaurant to save her home from foreclosure. After losing a loved one to a preventable medical condition, Amy Vilela didn't know what to do with the anger she felt about America's broken health care system. Cori Bush was drawn into the streets when the police shooting of an unarmed black man brought protests and tanks into her neighborhood. Paula Jean Swearengin was fed up with watching her friends and family suffer and die from the environmental effects of the coal industry. At a moment of historic volatility in American politics, Knock Down the House follows these four women as they decide to fight back despite having no political experience, setting themselves on a grassroots journey that will change their lives and their country forever.

“We are thrilled to be partnering with Netflix on the release of Knock Down the House,” said director Lears, who also co-wrote the film in addition to producing. “This platform will allow us to reach huge audiences worldwide, including viewers who may not usually watch independent documentaries. We’re also very excited to be working with Netflix on a campaign to spark wider cultural conversations about our democracy and how it can continue to evolve.”

“It is a transcendent moment when skilled filmmakers are able to train their lens on a major transformation,” said Lisa Nishimura, VP of Original Documentaries for Netflix. “With intimacy and immediacy, Rachel Lears and Robin Blotnik, bring viewers to the front lines of a movement, as four women find their voice, their power and their purpose, allowing all of us to witness the promise of true democracy in action."