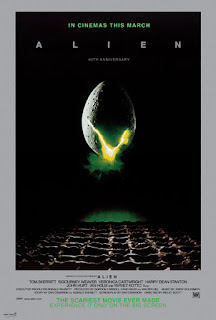 You know how we all at The DreamCage (OK, me, it's just me - Ed) love a good stats sheet when it comes to movies? With the re-mastered film back in cinemas from tomorrow to celebrate its 40th anniversary, here's some stats we got sent about ALIEN...

(yes we're adding this first one ourselves... 1 - the only film retrospective article worth reading is by Ren Zelen and can be found HERE)

Now on with the real stats...

3 Words – That sold the script to the studio: “Jaws in space”

4 Minutes – The full screen time of the Xenomorph (yes really, that's all in the original film)

5 Directors – That were considered before they found Ridley Scott

26 Feet – The height of the Space Jockey prop

130 Eggs – The number of prop Alien eggs made

$4.2 million – The original budget of the film, which was doubled after Ridley Scott storyboarded his ideas

273 Cinemas – That’s how many cinemas will be showing Alien’s 4K restoration and re-release in cinemas from 1st March. Find out more HERE