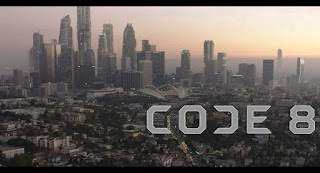 The film takes place in a world where 4% of the population are born with some type of supernatural ability. Instead of being billionaire superheroes, most ‘specials’ live in poverty and resort to crime, forcing the police to become more militarized.

The story follows a young man with special powers (Robbie Amell) struggling to find work as a day labourer. After a dispute over payment, he finds himself in a confrontation with a police officer (Sung Kang) and the autonomous robots backing him up.

Directed by Jeff Chang, and based on his own short film, Code 8 also stars Aaron Abrams, Stephen Amell, Greg Bryk, Vlad Alexis, Laysla De Oliveira, Kari Matchett and Simon Northwood and is due to hit cinema screens later this year.