Film - One Flew Over the Cuckoo’s Nest 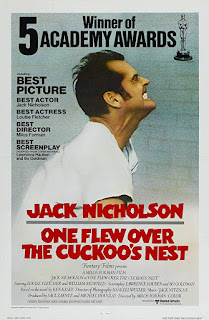 Kraig Taylor-Bryant took over the asylum and watched One Flew Over the Cuckoo’s Nest (with some spoilers)...

So, when my dad gave me this film, I didn’t think very much of it. I mean, hell, I didn’t think very much of it even after watching it for the first time. I suppose I didn’t really understand the point of the film at the time. But, watching it again, I realised this is a film about a guy showing patients within a mental institution how to have fun, and how be like everyone else. There is something quite powerful about that. Not to mention the incredible acting by everyone in this film, as well as the surprisingly perplexing, but also impactful, ending among other things.

For those of you that don’t know what the film is about, Jack Nicholson is Randle McMurphy, a guy who pleads himself as insane to avoid work in prison. Whilst he’s at a mental institution, he learns to try and make the most of being there, and in doing this, shows everyone there how to have fun; how to play basketball, how to gamble/play other card games, and how to enjoy the better things in life, by sneaking out on a bus. These people eventually end up becoming friends with Randle and, when he has the chance to sneak out, he ultimately chooses not to, but as a result, he ends up dying there.

The film also seems to deal with deeper themes, I think, that involve what it is that makes someone a bad person. This came to my mind after I realised that the tagline of the film is “If he’s insane what does that make you”. This really made me think because, in the film, it seems to explore this fine line. Especially during the final scene of the film when another patient, “Chief” Bromden (Will Sampson), ends up killing Randle and escaping the institution. Now I think in that moment we realise that maybe this guy wasn’t actually crazy, that Chief was actually a bad person, like Randle was (with the main difference being that Randle isn’t exactly a killer). Or it’s possible that Chief was actually insane but also dangerous, only people just didn’t realise it. But the big question is, was Randle crazy or just criminal for having raped a younger girl, and having started at least five fights? It’s a question that I really wish they could have explored more in this film, or maybe given some form of an answer for.

It’s interesting that Randle ends up caring for the people in the mental institution because it shows that he is capable of caring about other people, and he isn’t just a horrible person that only cares about himself. Or maybe it is the fact that he spent time with these people, so started to understand what it’s like for someone who is afraid of the real world, which helped him to show empathy, or even become a better person. I mean, this could even raise questions as to if it’s even a good idea to throw someone in prison, where they can be influenced to continue to behave the same way that they did to get themselves in jail in the first place, because they’d likely be influenced by those around them, to not improve as people. I think this film raises the question that maybe helping these people to learn empathy is what the key to improving a criminal is.

It wasn’t just the people in the institution influencing Randle, but it was also Randle that influences them. He teaches them to gamble, and how to feel closer to each other through things like baseball, just by pretending that baseball is on the TV. He also teaches them to stand up for what they rightfully deserve because, after finding out that a lot of the people at the institution’s meetings are actually there voluntarily, you realise that people should be entitled to what belongs to them. That was announced by Cheswick (Sidney Lassick), in regard to his cigarettes, at one point in the film. I think Cheswick’s development as a person is clearly through the influence of Randle because at the start of the film, he’s too scared/nervous to even want to talk during the meetings. But Randle’s rebellious attitude, like when Randle protests with the nurse to be allowed to watch the baseball game, shows him what’s possible. So in a way, Randle also teaches all the patients to be more outspoken and be confident. 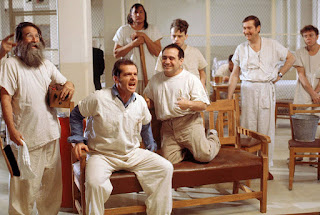 What I didn’t understand about the film during the first watch was, why didn’t the people in the institution leave, if they were there voluntarily. But then I realised, it’s because each of them is hiding from something. Harding (William Redfield) made this the most obvious to me. He’s a character that is there voluntarily because of his paranoia of his wife cheating on him. And, in a way, he’s hiding away so that he doesn’t have to find out. Another example was Billy (Brad Douriff) because of the strange, unstable relationship he seems to have with his mother. The first clear sign of this was when he asked his girlfriend or someone that he cared for, if they would marry him, he never told his mother that he was going to do it. I think that made it obvious that he didn’t have a very good relationship with his mother, or he had some negative feelings towards her. Later in the film he also sounds very afraid, after he sleeps with a woman whilst he’s at the institution, when the nurse says that he’s going to have to tell Billy’s mother. And, ultimately, it was that fear of his mother, or fear of how she would react, that led him to kill himself.

I think it was people like this, who were there voluntarily, that were actually in that place for a similar reason to Randle McMurphy. They were there because they were trying to escape the struggles of real life which I think, deep down, everyone wants to do at some point. And that’s what reinforces this film during the moments when Randle brings some positivity to them, like when he takes them out fishing, which I think is clear was initially for his own benefit, with him wanting to seek out a good time, although he ends up being quite close with all of these people. And we get to see how just going out fishing on a boat can make them realise the bright side of life, and that despite the negative parts of life, there are good parts to it, that make it worth confronting the bad.

The story also has an interesting way of not establishing a protagonist, like most films seem to. The film is constantly making us want to not like the head nurse, Nurse Ratched (Louise Fletcher) at the institution, but we’re also just as constantly reminded of the fact that Randle is a criminal through his rebellious attitude. So, in a way, the closest thing we have to a protagonist, are the patients who are actually crazy. I suppose it’s the people at the institution that affect both Ratched and Randle as people. With Nurse Ratched, at some points trying to play the music loudly to accommodate these people, whilst Randle is also trying to bend the rules to accommodate himself, but also to entertain others in the ward (based off of what ends up happening when Randle ends up pretending to watch the ball game on the TV).

Overall, I think that in many ways the film explores the effect that a criminal can have on people who have mental problems, whilst also exploring what it is exactly goes on inside a rapist’s head, if they’re not crazy. And I think all of these things give us a lot of food for thought on how humanity is capable of behaving, when influenced by the behaviour of others.

And I now realise that perhaps this film really is worthy of the 5 Oscars that it won.