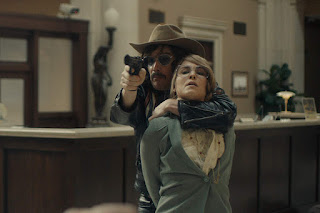 Written and directed by Rob Budreau, who previously worked with Hawke on the Chet Baker biopic Born to be Blue, the film premiered at last year's Tribeca Film Festival and is only now making it into cinemas. The plot picks up on the real life bizarre Swedish bank heist and hostage crisis in 1973 which actually led to the psychological term Stockholm Syndrome being coined, as the hostages in the bank, including Bianca (Noomi Rapace) start to sympathise with, and plead for mercy for, their captor petty criminal Lars Nystrom, played by Ethan Hawke, who only wanted to spring his pal Gunnar (Mark Strong) from jail.

According to the Dan Lang article in The New Yorker in 1974, the real events that inspired the film are as follows:

"Jan-Erik Olsson's takeover of Sveriges Kreditbank in Stockholm, where he & an accomplice held 4 hostages for 6 days in Aug. 1973. The Swedish gov't refused to allow Olsson to leave the bank with hostages. The captives--2 young unmarried women, Kristen Ehnmark & Elisabeth Oldgren; a young mother, Birgitta Lundblad; & an unmarried young man, Sven Safstrom--seemed bound in peculiar amity with their captors, & feared police intervention. The police enclosed the group in the bank vault, & evaluated Olsson's behavior, concluding that he was rational, & that the more time he spent with his captives, the more likely the drama would end in his capitulation. The police filled the vault with tear gas, & Olsson gave himself up."

The article writer interviewed the hostages, the police, the doctors, & Olsson, who was imprisoned until 1983.

And, yes, we checked, Olsson was released from prison in the early 1980s and went on to a) run a supermarket in Thailand and b) become a mechanic in Sweden before he retired.