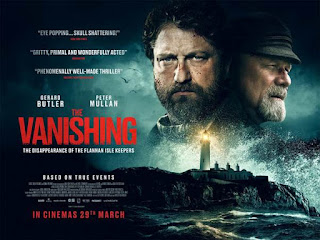 Coming to cinemas at the end of March, watch the trailer for The Vanishing...

On an uninhabited island, 20 miles from the rugged Scottish coast, three lighthouse keepers arrive for their six week shift. As Thomas (Peter Mullan), James (Gerard Butler), and Donald (Connor Swindells) settle into their usual, solitary routines, something unexpected and potentially life-changing occurs – they stumble upon something that isn’t theirs to keep.

Where does it come from? And to who does it belong?

A boat appears in the distance that might hold the answer to these questions… What follows is a tense battle for survival as personal greed replaces loyalty – and fed by isolation and paranoia, three honest men are led down a path of destruction.

The Vanishing is a psychological thriller inspired by a true, unsolved legend – the Flannan Isle mystery. Flannan Islands is approximately twenty miles west of the Outer Hebrides island of Lewis, in Scotland. The small island where the lighthouse is situated is called Eilean Mor (which ironically means the big island in Gaelic, even though it only had the lighthouse on it).

The legend came about because on, or about, December 15th, 1900, three lighthouse keepers stationed on Eilean Mor, Thomas Marshall, James Ducat and Donald MacArthur, mysteriously vanished without a trace, and speculation as to what became of the three men is still rife after almost 118 years.

Records show that on December 12th, 1900, Thomas Marshall, the second assistant keeper, wrote in the lighthouse log of "severe winds the likes of which I have never seen before in twenty years". He also noted that Principal keeper James Ducat had been "very quiet" and that the third assistant, (the Occasional) Donald MacArthur, had been crying, although MacArthur was a seasoned mariner and known as a tough brawler on the mainland.

The December 13th entries stated that the storm was still raging and that all three men had been praying, despite the fact that all were experienced lighthouse keepers and were safely situated in what was a brand new lighthouse, 150 feet above sea level.

The final log entry at the lighthouse was made on December 15th. It simply read "Storm ended, sea calm. God is over all."

Even stranger though is that weather records of the day had no reported storms in the area on the 12th, 13th and 14th of December that year and show the weather was calm, with storms not coming until December 17th.

The Vanishing hits the big screens on March 29th then comes to VOD and DVD on 1st April. And you can find out more about the real mystery here.