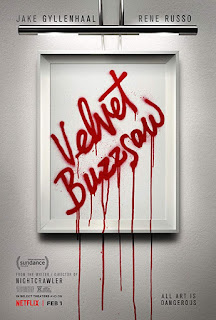 Premiering today on Netflix, find out more about Velvet Buzzsaw...

“I want this movie to do for the art world what Jaws did for swimming. When walking into a gallery of art, one should fear what might happen...” - writer/director Dan Gilroy

Set in the contemporary art world scene of Los Angeles where artists and mega-collectors pay a high price when art collides with commerce, Jake Gyllenhaal plays ‘Morf Vanderwalt,’ a revered art critic who can make or break an artist’s career. Rene Russo is ‘Rhodora Haze,’ once a famous punk rock musician who is now a legendary gallery owner with a taste for the avant-garde. Zawe Ashton is ‘Josephina,’ Rhodora’s ambitious associate with plans to climb up the ladder at any cost. Natalia Dyer is ‘Coco,’ a recent college graduate who wants to explore a career in the art business, an innocent who is quickly learning the ropes. Toni Collette is ‘Gretchen,’ a museum curator who switches to the private sector to make the big money. John Malkovich is ‘Piers,’ a celebrated painter Rhodora represents who hasn’t produced any noteworthy work in years. Daveed Diggs plays a contemporary artist named ‘Damrish’ and Billy Magnussen plays ‘Bryson’, a gofer with aspirations.

When Josephina stumbles upon a trove of undiscovered paintings created by her recently deceased neighbor, ‘Dease,’ who has no legal heirs, she claims his work for herself. To introduce Dease to the art world, she partners with Rhodora. Capitalizing on this dead man’s work becomes their mutual obsession, but as Morf investigates Dease’s past, he unearths uncomfortable truths. What seems visionary at first becomes deadly, as these haunting images come to life for those who capitalize on the paintings. 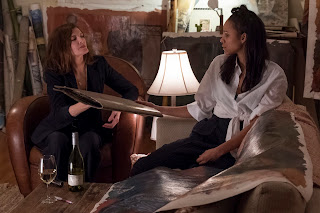 Velvet Buzzsaw is Dan Gilroy’s third original screenplay that he is directing. His directorial debut, Nightcrawler, won the Independent Spirit Award for both ‘Best Screenplay’ and ‘Best First Feature’ as well as him earning a ‘Best Original Screenplay’ Academy Award nomination. His second film, Roman J. Israel, Esq., earned Denzel Washington his sixth Oscar nomination as ‘Best Actor.’ Each one of his original screenplays have focused on different niche worlds—from journalism to criminal justice and now modern art.

The idea for the film came to Gilroy after visiting the Dia contemporary-art gallery in Beacon, New York two years ago. “It was the Tuesday after Christmas, at about 5 o'clock in the afternoon, and no one was there,” recalls Gilroy. “I was wandering around this huge, empty warehouse with all this rather disturbing contemporary art. And I wound up in the basement in a video installation with, like, dentist chairs and rats running around. And I just thought, ‘Man, this would be a great place for a horror movie.’” By the time he got home, he had hatched a rough plot. “The idea that artists invest their souls in their work and it’s more than a commodity—that has always interested me. I suddenly saw a way of incorporating it all, to explore how, when art and commerce are dangerously out of balance, bad things can happen. It clicked very quickly.” 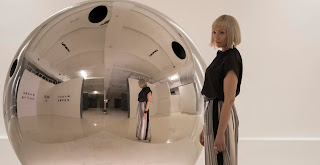 “I believe ‘Art’ is a dialogue,” says Gilroy. “It’s not a one-sided conversation, but there’s an eternal historic conflict between art and commerce.” This is a recurring theme in the film. As Gilroy puts it: “Art can’t really exist without somebody paying for it, but once art becomes monetized, it loses something. I think the problem when you over-monetize ‘Art,’ it becomes an object rather than something imbued with a spirit, or an idea, or even a soul.”

To play art critic Morf Vanderwalt, Gyllenhaal did plenty of research: “I’m familiar with the art-collecting world... but I’m proud to say I’m not that familiar with the art collecting world!” he laughs. “I have sort of dabbled in it but at the same time I’m just fascinated by the personalities in it. And yeah I did a lot of research particularly about art critics themselves. You know there are a lot of references and different critics that I pulled even just physical looks from, but really I think Dan and I were interested in the idea of this character “Morf’ who actually morphs morally, sexually, his personality, sometimes his voice. As the movie progresses what I thought was interesting about him as a character was that he went from sort of this cliché of an idea and Dease kind of undoes him into something else. By the end of the film, I think his true self comes out. So his behavior is different. And that was just, as an actor, really interesting to get into.” “I wrote the part of Morf for Jake,” says Gilroy. ‘I was very much looking forward to working with him again and we picked up where we left off. We just have a shorthand way of working. We think the same way, we’re both aiming for the same yardstick, the same goal. And we collaborate really well together. I consider him to be a collaborator. To hire Jake and just use him for his acting skills is a waste because you want his input. He dives really deep into the material.” 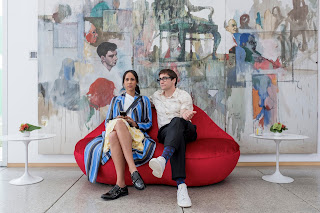 “This is a difficult film to categorize,” suggests Gyllenhaal. “It defies tone. But I think it’s a horror film and I think it’s a satirical comment on society particularly art and how we view art, how we perceive it both monetarily and then also creatively. All the people inside of it, the people who take advantage of it, be it agents and representatives but at the same time also the artists themselves. How art can really destroy creativity. How money can destroy art and vice versa. How they cannot work without the sort of their coexistence. And I think all of those ideas are wrapped up into the idea that it is a complete, absolute horror. And it’s hilarious as a result of that. So I think I would describe it as a modern day parable set in the horror genre about potentially what’s to come.” 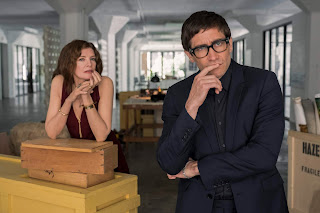 “As I said, I think we live in a day and age where art is really very much looked at as a commodity,” says Gilroy. “Movies are a commodity. A painting is a commodity. A song is a commodity. How many views did it get on YouTube? And those are not irrelevant. They’re a metric of something. But art exists for its own sake. There’s a line that Zawe says to Daveed in the script when he’s leaving her and he doesn’t want to be in the gallery anymore, and she says, “What’s the point of art if nobody sees it?” And he kisses her on the forehead and walks away and it’s this moment where you realize that he knows she’s never going to understand what the real value of art is. An artist understands what the real value of art is. A piece of art is a way of transmitting an idea or an emotion or feeling. If four people have an experience with something, that makes it just as relevant as if four billion people see it. Honestly, to me it really does. It’s not the number of people that see it. It’s that you have put your energy out there in the space-time continuum and it’s rippled out and it’s affected something and you don’t know where that person is going to go after having seen your showcase play that you put on or painting that’s hanging in a lobby somewhere that’s not the Tate. It doesn’t matter. Ultimately you have to make peace that as an artist you are investing into something that you feel is important and you’re moving on and whoever finds it, finds it. I mean, I want people to see this movie and I want people to love it. But I know enough people are going to see it and respond to it that I’m going to be able to have conversations with people and go, wow that was interesting, made me think about something.

The film drops on Netflix today. Images, information and quotes courtesy of Netflix.