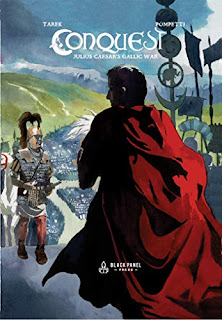 Conquest: Julius Caesar's Gallic Wars is a 136 page graphic novel account of Julius Caesar's conquest of Gaul from 49 B.C. to 52 B.C. based on Caesar's own account of the military campaign. Painstakingly painted by hand in watercolour and meticulously researched using the most recent archaeological data available, this book is one of the most accurate accounts of this period in history.

"The whole of Gaul is divided into three parts: one of which the Belgae inhabit, the Aquitani another, and the third a people who in their own language are called 'Celts,' but in ours, 'Gauls.' They all differ among themselves in respect of language, way of life, and laws...." Thus begins one of the major works of humanity, "The Gallic War," written by a man who marked our history and subconscious, Julius Caesar.

Vincent Pompetti is an italian artist born in Liège, Belgium, originally from Pineto and Atri, in the Abruzzo region of Italy. He graduated from the St. Luc Institute of Fine Arts in 1998 with a specialization in graphic novels. Two years later he authored and published his first graphic novel with Glénat called Planète Divine, leading to a collaboration with the scenarist and graffiti specialist Tarek. From that collaboration resulted several significant works including Sir Arthur Benton, and more recently The Gallic Wars and the pirate story, The Malouin. Both artists have invested in the independent publisher Tartamudo, with José Jover, and created the artist association known as Pegasus. Vincent collaborates with the Urban Art Magazine “Paris Tonkar”, and simultaneously develops his career in painting and illustration, having exhibited his art in Switzerland, Canada, Italy, and mainly in France.

Graduate of the Sorbonne (University Paris I) in medieval history and art history, Tarek launched "Paris Tonkar" in 1991, the first art book dedicated entirely to urban street art in Paris, which is still considered an important reference for urban art lovers. Since 1999 Tarek has written more than sixty graphic novels with various publishers. His work has won several awards including the Saint-Michel Award for Best Screenplay for his graphic novel Sir Arthur Benton in 2007. Although his time is often balanced between photography, street art, and television, from writing a US TV pilot to exhibiting street art in Montreal, his interest inevitably returns to comics.

Conquest: Julius Caesar's Gallic Wars is available direct from the publishers, or via Comixology or Amazon