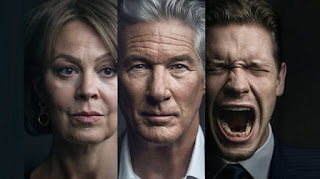 Ahead of next week's first episode of the new drama serial MotherFatherSon, the BBC have released an interview with one of its stars, Richard Gere...

US-born Max Finch (Gere) is at the heart of British politics and power, owner of a media empire that includes newspapers and television stations. Information is his trade: he holds dark secrets on everyone, and uses his power ruthlessly.

His son Caden (Billy Howle) is the youngest ever editor of Max’s prized newspaper, The National Reporter. But Caden is crumbling under the pressure of his father’s expectations, numbing his pain with drugs and excess. When Caden suffers a massive stroke, he’s left like a helpless child, battling to rebuild his life.

For Max's aristocratic ex-wife Kathryn (Helen McCrory), who has been frozen out of the family and spends her days working at a homeless shelter, this is a second chance to be a mother to her son. A respected former journalist from a wealthy British family, she’s determined to reconnect with the sensitive boy Max ripped away from her.

As Max and Kathryn fight for the soul of their son, another fight is about to begin. Caden knows secrets that could bring Max’s empire crashing down. And Caden’s silence can’t be bought. This is a fight for family, a fight for truth - a fight for the heart of the nation. 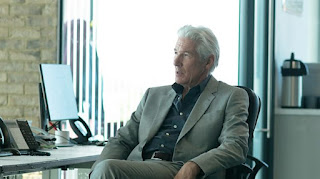 
What can you tell us about Max?

At the surface you think you know this guy, because we know figures like him from real life - men like Ted Turner, Rupert Murdoch, Roger Ailes and Richard Branson. Guys who have achieved so much in life you have a sense that they have a golden touch, and are involved with all kinds of businesses linked with power, politics and media.

But Max is not based on any of them - he’s someone new, a work of fiction. So my question was, how do you create a character who is unique, but at the same time is a recognisable contemporary or a counterpart to those men, who reaches the audience in the same way, but has a personality of his own?

When you look at what Max has done with his life, he’s kind of a Citizen Kane type character. He came up out of the steel industry before giving that up to buy a local newspaper, and then another bigger one, and another, and then finally becoming the owner of reputable national newspapers and news organisations that are involved in the highest levels of politics.

Where do we find Max at the beginning of the series?

The series begins with Max flying into London after some time away. The first episode is about meeting the people in his life and returning to his UK-based newspaper, which Max’s son Caden - played by Billy Howle - is running now. Max is involved with UK politics, and he’s the kind of guy that’s always got a lot of plates spinning in the air. In episode one we see some of those plates spinning, and really get a sense of his energy and how he engages with the world.

You mentioned Caden (Billy Howle). What is Max’s relationship with him like?

Oh it’s complex, like I think many father and son relationships are. Max is the kind of guy who has high expectations of his son and maybe pushes him a little too hard down a track that fits his expectations. Caden of course chafes at that, like many sons do.

And what about Max’s relationship with Kathryn (Helen McCrory)?

Well they’re divorced, and you know, they still have some kind of a relationship, but you see that it’s always going to be prickly. There certainly is still love and concern there, mixed with regret and pain and suffering. But they do their best to be civil, certainly around Caden after what happens to him at the end of episode one.

So would you say Max is a good guy or a bad guy?

Like all of us, he is a mix. I was still trying to figure out as I was playing him just how dark he could go. Max does questionable things - mischievous things - but I certainly don’t see him as an evil villain character. I think his behaviour and actions are understandable, and that’s my job - to make him understandable from a human point of view. He is one of us, all be it he has more power and money, and he probably has more problems than most of us. 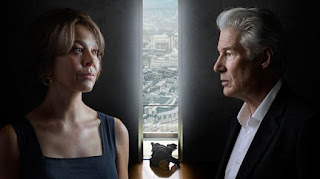 What did you think of the scripts when you first read them?

I’ve been involved with this series for a long time, long before all eight scripts were complete, and it was so intriguing to see where things were going. You want to know where they’re going to go. Tom Rob Smith is able to juggle a lot of characters, and from the beginning I felt that there was a Shakespearian scale to this story. There are even elements in the language Tom uses which are kind of contemporary Shakespearian, that have a real poetic depth to them and such power. I’m sure Tom will like to hear I’ve said that! But it’s true.

How did you get involved in the show? You haven’t done TV for a while…

I’ve never done anything like this - playing a lead character in a TV series, or even playing a character for this amount of time. The only thing I remember doing on TV was at the height of the US AIDS crisis, when the producers of a piece called And The Band Played On - about HIV AIDS and how the pandemic started - needed someone with some visibility to play one of the parts in order for the series to get greenlit. So I found a couple of days in between something else I was doing to be a part of that.

But I’ve not done anything for television before or since then, so this is my first time making a whole series with the kind of novelistic approach that you just can’t do in film. I see MotherFatherSon as an eight-hour movie.

Why should people watch MotherFatherSon?

I can only speak for myself, but it’s rare to see this kind of depth and presentation of - not just characters - but human dilemmas, emotions and thoughts, and confusion, and people trying to do the right thing, trying to do well and tripping over themselves and everyone they care about.

This is the world we live in, because most families are dysfunctional to some degree, and this one certainly is.

I see populism in the US, and it’s obviously happening here in Europe, and Asia. It’s happening everywhere. So that’s the context for this very human story. I think that’s unusual and it’s why I feel MotherFatherSon is Shakespearian in scale. It’s got real human honesty, but also a vastness in its ambition of dealing with big questions.