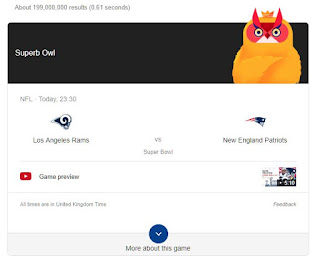 It was a big night for American Football and Susan Omand picks her Top 5 favourite Superb Owl LIII adverts (so far -  bear in mind this was written at 11pm GMT last night, before the game had even kicked off) ...

It's a little known fact that I'm a huge NFL fan and Superbowl Sunday always means a very late night for me, so apologies if everything is late in the morning [it won't be - Ed]. I love watching the game itself, even though four 15 minute quarters often takes 4 or 5 hours to play, and have even been to a couple of "real" games, including the fourth Worldbowl when the Scottish Claymores won against Frankfurt Galaxy (D-Fence! D-Fence!) and  the first ever proper London NFL game when the New York Giants (Go Giants!) played Miami Dolphins at Wembley.

But more than the game itself, it's the hype around the big day that makes it enjoyable - the (usually awful) choice for the half-time show (I mean, Maroon 5. WTF?), the (often overly elaborate) National Anthem singing... and the star studded TV commercials. This year has been no exception with the big companies throwing big money to capture their biggest TV audiences of the year in the US. Even Google got in on the act this year, making the most of an often used typo on their search engine (pictured above).

Here's five of the best TV ads that caught my eye this year.

[note - we're just running these for the fun of the adverts, not because we endorse any of the companies or their products - Ed]

AMAZON - not everything makes the cut.

Watch it for: the Alexa dog collar.

Watch it for: Sarah Michelle Geller NOT mentioning vampires

Watch it for: Steve Carrell. Oh and the diamante encrusted pepsi tin.

Watch it for... well, you'll know it when you see it. Classic.