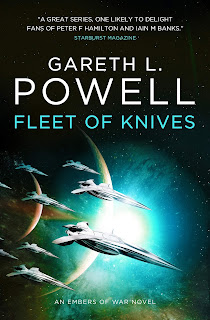 Tony Cross looked to the stars and read Fleet of Knives, the second Embers of War novel by Gareth L. Powell, thanks to Titan Books...

I have, as I have grown older, become a bad reader of science-fiction. It used to make up a large chunk of my reading, which is why there are so many of the ‘Classics’ that I’ve never got around to. Over the last ten years or so, maybe longer, I have drifted away from it. And I don’t know why. I occasionally have a spasm and binge read a handful of novels and then return to other types of fiction.

I had heard of Gareth L. Powell because – for reasons I’m not entirely sure of – I kept seeing his book ‘Ack-Ack Macaque’ pop up in my Twitter feed. It looked interesting so, of course, I have absolutely failed to get around to reading it. Then I heard he’d written a space opera, beginning with a book called ‘Embers of War’. That book I at least bought. I have, of course, not got around to reading it yet.

So, when I was asked to review ‘Fleet of Knives’, which is the second book in the ‘Embers of War’ series I thought I’d ruin the experience of reading them in order – the third is coming out in 2020 – and see whether ‘Fleet of Knives’ was any good. If it was, I will go back and read ‘Embers of War’ and find out how we got here. I feel this is a suitably – and forgive the Doctor Who-ism – timey wimey way of approaching a science-fiction trilogy.

Fleet of Knives is the story of three ships – possibly four – and a Fleet: Trouble Dog, a former warship; Lucy’s Ghost, which is a small civilian ship, The Restless Itch, an old generation ship and The Marble Armada. It’s also the story of their Captains and crew. Trouble Dog is Captained by Sal Konstanz, Lucy’s Ghost by ‘Lucky’ Johnny Schulz and The Restless Itch…well, that’s a whole different can of worms. The Marble Armada meanwhile is ‘led’ by Ona Sudak, a poet and war criminal.

It’s also the story of consequences, of family, of grief and – perhaps most importantly – it is about whether the means justify the ends. It’s threads obviously reach back to ‘Embers of War’, but I think you can read this book alone and pick up the important details. Of who did what to who and when. The best thing about the book is that there are moral questions throughout. It’s not just big spaceships firing big weapons at each other.

The book tells its story through a different character in each chapter. Each one the thread of a narrative tapestry that is weaved neatly by Gareth L. Powell into something rather impressive. He can write, I’ll give him that. The plot comes together nicely. You want to read the next page and the next page and when you get to the end that feeling of disappointment washes over you that comes from finishing a book that you’re really enjoying.

It reminded me a little of Iain M. Banks, but I think a book like this is impossible to write without being influenced by him. Was he the first writer to give his spaceships names that aren’t the traditional ‘borrowed from the US/British Navy’ ones? It also reminded me a lot of Becky Chambers’ ‘A Long Way to A Small, Angry Planet.’ And those are a pretty good standard to be reaching for.

It’s also good to see that the characters aren’t just typical science-fiction blokes. ‘Lucky’ Johnny Schulz might seem like that at the beginning, but he isn’t. Sal is a woman. And mostly that goes unremarked. She’s a strong woman. But you don’t have to be told that. She demonstrates it through her actions and character.

So, I highly recommend this book. I’m looking forward to reading both Embers of War and the final book – well, I say final I suspect only Gareth L. Powell and Titan Books know whether that will truly be the case – Light of Impossible Stars, coming in February 2020. Meanwhile dig into this one and I hope you enjoy it as much as I did.

There’s a real test for how much I like a book. I do – most – of my reading on the tube into and home from work. If your book makes me miss a stop because I’m so absorbed in it then it’s a winner. I missed Waterloo twice reading this. Enjoy.