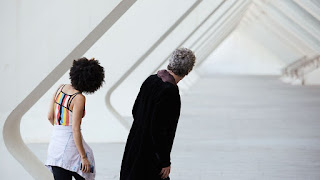 Our Doctor Who expert, Tony Cross, is journeying through all of time and space to bring us his thoughts on every available Doctor Episode. Today is the Twelfth Doctor adventure Smile...

I might struggle to say much about Smile. That’s not because I didn’t enjoy it. I did. It just felt a little lacking in something. But I am a man who likes to look for the positive in all Doctor Who. If you want to find people who dislike Doctor Who episodes with a passion that I admire in a strange self-harming way, then the internet is your oyster. Here at Patient Centurion Towers we like to enjoy the things we enjoy.

Let’s begin with the most obvious thing: Bill Potts is a wonderful addition to Doctor Who. She’s quick witted, funny and good-hearted and she’s an ordinary person in an extraordinary situation. She isn’t a mystery to be solved. There’s a lot of Bill Potts’s out there but alas not many Doctors to help them see the universe.

And isn’t that part of the appeal of Doctor Who? The thought that one day someone will appear and take us out of our mostly mundane lives and take us out there to see the universe in all its glory? Except, as this episode demonstrates, the universe is a dangerous place and there’s an awful lot of running. I’d be dead in a week, especially as one of the first places I’d want the Doctor to take me would be Berlin in the 20s/30s. I’d love a trip to Weimar Germany. I’d be happy with exploring the night life and getting my hands on some fantastic art to take home with me. Or late 19th century/early 20th century Vienna where I could hang about in the cafés and get myself some Schiele paintings. Or Mexico and meet Freida Kahlo in person. I suspect I’d be an art junkie or an event junkie. Persuading the Doctor to let me see Shakespeare plays or those opera first night’s where audiences booed and rioted. All that would be great. It would be the monsters that would be the problem.

But that was a whacking great digression. There is something wonderfully creepy about how this episode starts and the fact that the villains aren’t really villains but nanobots taking their programming far too literally. In this story the nanobots are called Vardy, which kept making me think of Jamie Vardy, which I suspect wasn’t the intention of Frank Cotterall-Boyce (or perhaps it was.)

The story of the Doctor’s sorting out of the problem, which involves making landlord-capitalism an actual victor, is fine. It’s just not the most exciting of adventures. That’s not quite what he did. He freed a set of slaves by re-booting them and effectively got their former slave masters to pay them reparations in the form of rent. Then he leaves. This is one of those Doctor Who stories where I wonder what the hell happens a couple of years after he’s gone and the rent increases start coming in. There is an interesting philosophical question here, which is how do you free someone who doesn’t know they’re a slave because they don’t have free will?

It’s nice to see The Doctor almost making a terrible mistake too. Occasionally the Doctor’s decisiveness can seem like a problem and this was one of those situations. He rushes in where angels fear to tread. And then has to sort out his own mess before it is too late. 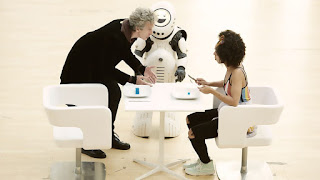 Once again Capaldi’s and Mackie (or the Doctor and Bill if you prefer) bounce off each other beautifully. Even after only two stories I’m starting to think that Bill was the companion the Twelfth Doctor was waiting for.

This is also another of the those new Doctor Who stories that has well-known performers in tiny parts and that makes you think…oh can’t we have a bit more of this person/these people. In this case Mina Anwar and Ralf Little.

‘New’ Doctor Who flirts occasionally – see ‘Dinosaurs on a Spaceship’ and ‘Sleep’ – with a future in which India (or Indo-Japan) has a large part to play in the space travelling future. I’d like to see more of this. It would be interesting to see that future. I was listening to David Tennant’s podcast interview with Whoopi Goldberg and there’s a discussion there about Uhuru in Star Trek. And Goldberg points out that Uhuru was the first time she’d seen a black person in the future. Until then the future was all white. And I’d never considered that. After all I’m a white man. I’m always there in the future. Doing pretty much whatever it was white men were doing in the present. Imagine not being represented by a whole genre. Imagine not being expected to exist in the future. And not necessarily because the writers or creators of science-fiction were racists – even though some of them were* - but because they never gave it any thought. Because it didn’t matter.

I’m ranting away again and that’s because I don’t have much to say about this episode as an episode. It looks amazing though. Lawrence Gough directs well enough. The trip to Spain to film in the City of Arts and Sciences in Valencia pays off because it looks pretty ‘of the future.’

It’s an OK story that doesn’t necessarily have time to explore all the ideas that are bubbling away underneath it. I’d watch it again now though just for Bill and the Doctor though. I’m loving those two.

*I’m looking at you H.P. Lovecraft