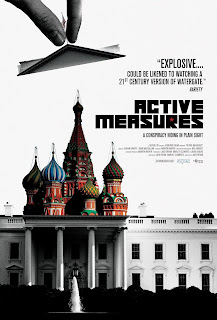 ACTIVE MEASURES chronicles the most successful espionage operation in Russian history, the American presidential election of 2016. Filmmaker Jack Bryan exposes a 30-year history of covert political warfare devised by Vladimir Putin to disrupt, and ultimately control world events. In the process, the filmmakers follow a trail of money, real estate, mob connections, and on the record confessions to expose an insidious plot that leads directly back to The White House. With democracy hanging in the balance, ACTIVE MEASURES is essential viewing. Unraveling the true depth and scope of "the Russia story" as we have come to know it, this film a jarring reminder that some conspiracies hide in plain sight.

I am a big fan of documentaries, but I am not blinkered enough to think that any are made from a point of view of just interest. Any filmmaker passionate enough to bring a subject matter to the screen has a vested interest or opinion they are trying to get across and in the main a documentary will find an audience due to the viewer sharing similar interests or opinions. That’s a fact, it’s the way of the world and its not a bad thing, all art needs an audience. On occasion though it is possible for a viewer to go into a film with a completely open mind as they have no opinion on the subject in hand. That viewer today is me, and that subject is Russia’s supposed interference in the American political system regarding getting Donald Trump elected. I have no opinion for various reasons. I am not American or Russian. Despite a huge interest in American Politics it is mainly just the Cold War period in which I am widely read, modern politics holds no interest for me. I also have muted and unfollowed most social media accounts that bring news into my life because I am a bit sick and tired of reading depressing things on 24 hour rolling basis. The only opinion I held going into Active Measures about Donald Trump was that I couldn’t believe people had voted for somebody so inarticulate, historically U.S. Presidents have been able to hold you in the palm of their hands through oratory skills that defy classification. I am not sure Trump can finish a sentence unaided. So, let’s see what all the fuss is about and see what social media have had their knickers in a twist about shall we? 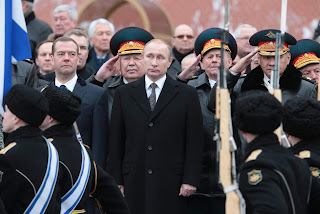 Firstly, let me discuss the documentary as a film, not so much its content just for now. I am not a huge fan of documentaries that do not have a narrator. When watching something I have little knowledge about I like a storyteller to guide me through or to preempt any questions that may arise and Active Measures has no such guide, however the way it is sharply edited and with its interviewees being experts in their chosen fields I found the film flowed nicely and no confusion occurred on my part, what I was their to learn was explained to me smartly without making me feel like an idiot, and I grasped the magnitude of the points of view being put across with no problems. Jack Bryan and his team deserve plaudits for the films structuring. They also deserve applause for the quality of their contributors, all specialists in the subject matter whether politicians or business people, Doctors or specialists, the list is staggering in its quality. Don’t believe me? Here is the list… 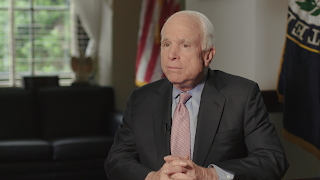 I mean, look at the luminaries on that list. Experts from both sides of the political spectrum, specialists in all aspects of the subject matter that is deep and plentiful and involves the history of Vladimir Putin, the FSB, Money laundering, warfare, immigration, media and propaganda, and most especially and the part that gave me the most interesting experience the different elements of warfare and why Russia under Putin gas behaved in the way it has for the past few decades. Before anyone jumps on the bandwagon and points out defeated Democratic nominee for President Hillary Clinton who may have more angst to towards Trump than most, there is also Republicans past and present who get equal airtime. In fact considering how biased some may think Active Measures is it is actually pretty fair in its representation of points, the criminal acts mentioned aren’t just the filmmakers shouting into the void, they are all provable facts, I didn’t know Trump had been done for laundering Russian money via his Taj Mahal casino but there right on the screen are the court documents. His well-publicized bankruptcies are there right on the screen, and the money he made through condos in Trump Tower that lifted him out of the financial mire, all proven to be laundered Russian Mob money, there on the screen. When these undeniable facts are put right in front of you the more conspirator elements of the Putin/Trump story become more believable. Did I leave Active Measures believing that Trump was a Russian mole set up by Putin to give the Russians control of the U.S? No, of course I didn’t, and I don’t think the film set out to try and force that point either. I did however leave convinced that Putin has his fingers of corruption in far more pies than I thought, I left Active Measures convinced that Putin wants to reinstall the Soviet Union as the worlds powerhouse, and I left convinced that the way he can achieve that is to pull down democracy from the inside which is why Russian interference in the Presidential election happened. It wasn’t to install a Russian sleeper agent as president, it was to put an idiot in charge of the world’s largest sovereign state, an idiot who owes Putin for digging him out of the financial cesspool he was in, an idiot that will inevitably make a mistake in a foreign policy far beyond his comprehension and open a loophole that allows Putin control of something so large there will be no turning back.

Active Measures is an extraordinary watch that opens your eyes to undeniable facts that lead to opinions forming whether you want to hold them or not. Active Measures will probably turn out to be a divisive film, if you love Trump and hate Hillary there is not much in this film you’ll enjoy, and for those of us a bit sheltered from world events, a tad too hidden away from what is going on in the world it is a massive wake up call. It’s also an incredibly well structured and paced documentary that shows how powerful the medium can be so its also worth watching just for those reasons. Stunning on every level.