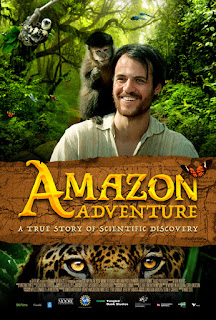 Amazon Adventure brings an epic and inspirational true story of an unknown British explorer, set in the heart of the Amazon rainforest, to the Glasgow Science Centre Cineworld IMAX Theatre next month...

Amazon Adventure, a spectacular IMAX®/Giant Screen film from award-winning SK Films brings audiences on a visually stunning odyssey through the wilds of the Amazon rainforest in an incredible story of scientific discovery.

The film traces the extraordinary journey of naturalist and explorer Henry Walter Bates - the most influential British scientist you’ve probably never heard of – who provided “the beautiful proof” to Charles Darwin for his then controversial theory of natural selection, the greatest scientific explanation for the development of life on Earth. As a young man, Bates risked his life for science during his 11-year expedition into the Amazon rainforest, accompanied for the first few years by his friend Alfred Wallace. Amazon Adventure is a compelling detective story of peril, perseverance and, ultimately, success, drawing audiences into the fascinating world of animal mimicry, the astonishing phenomenon where one animal adopts the look of another, gaining an advantage to survive.

Filmed on location in London, Manchester, Charles Darwin’s Down House and the remote Brazilian rainforest, Amazon Adventure uses the IMAX format to immerse viewers into a wild world of breathtaking beauty and captivating animal behaviour. Things are not always as they seem in the jungle and audiences will be mesmerized by an array of nature’s masters of mimicry. From the makers of the immensely popular and multiple award-winning film Flight of the Butterflies 3D, the film is directed by Britain’s own Mike Slee and executive produced by Jonathan Barker and Sean B. Carroll, starring Calum Finlay as Henry Bates, written by Wendy MacKeigan and Carl Knutson and shot by UK cinematographers Gerry Vasbenter and Richard Kirby, with an original score by Brazilian composer Antonio Pinto. Although filming in the Amazon was very challenging, the team constantly reminded themselves of what it must have been like for Bates, without any of the transportation and communication technologies available today.

Painstakingly researched for three years, Amazon Adventure enlisted the expertise of more than 100 scientists and historical advisors. MacKeigan and Slee sought out over 400 pieces of original research, which enabled them to draft the most comprehensive and accurate script and cinematic visualization of 19th century Amazonian exploration ever produced. “It’s an educational film so nothing was left to chance or uncorroborated” states MacKeigan. “What you will see is precisely the way it was for Bates.”

The team’s commitment to authenticity not only resulted in this rigorous re-creation, even using actual instruments and tools from the 1850s, but the writing team also incorporated many of Bates’ own words, as he was a gifted storyteller. The film, a co-production between Canada, the UK and Brazil, was granted unprecedented access by the Natural History Museum of London to film Bates’ own scientific field notebooks and botanical drawings, and to film the butterflies he personally collected over 160 years ago – butterflies that had never left the museum and had to go into quarantine for two weeks after filming.

Developed and produced in close collaboration with HHMI Tangled Bank Studios, the film also received major funding from the National Science Foundation. Other key partners include the Gordon and Betty Moore Foundation, the Simons Foundation and Foxconn Brazil.

Open to the public from 15th April at The Glasgow Science Centre Cineworld IMAX
Email ThisBlogThis!Share to TwitterShare to Facebook