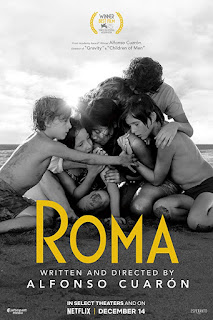 Now here’s a film that I felt drawn to, one that first caught my eye during the BAFTAS. The fact that it received so much praise and gained so many award nominations, even winning the award for Best Direction (for Alfonso Cuarón) and the Best Film award among many others, made me immediately feel the need to watch this movie. And I can honestly say that Roma is very much deserving of such praise.

The black and white style that the film uses is rather clever, because I think that it does a great job of reflecting on the sombre mood of the film as a whole. The dialogue also seems to always have something dark to keep it fitting for the story that it’s trying to tell. Even in the moments when it’s just a family sitting at a table eating dinner, one of the children will mentions something dark as if it is something normal; like when one of them says that “a boy who threw a water balloon at an army car got shot today”, as if this way of living is normal to them, it seems clear that they live in a pretty harsh area. I think the fact that it was subtitled in English also accompanied it really well. The way that it was done in its native language made it feel like it was in Mexico, and made it feel more real, whilst also making us empathise more towards people in this country that have to deal with this way of living, every day. I’m very glad with the fact that the director decided to go with this foreign language style, because, similar to other aspects of the film, it seems to make the film seem natural. However, the subtitles may be inconvenient for some to watch when looking away from the screen at times, because you may miss an important part of the story, or an impactful line if you don’t read it in time, but the story is well worth investing time in, and giving your full attention to.

Roma is based around a woman named Cleo, who is the maid of a middle-class family in Mexico 1970, exploring the issues that people in such a place, face and how one woman in particular became the victim of so much suffering, but remains the incredibly kind person that’s he is at the start of the film. It begins with Cleo cleaning the floor, to opening credits. I can always respect when a movie provides opening credits, because it ensures that the viewer sees who helped create a film, without the chance of the viewer switching off the TV, or leaving the theatre as often happens with end credits. Even at the start of the film we’re seeing the labours that she goes through, cleaning up after the family’s dog, picking up the kids from school, waking all the children up, doing the washing, and many others.

The other characters in the movie are equally interesting, one of the fellow maids of the house seems to have a very close relationship with her, and we get to see the fun and cheerful side of Cleo. Though when it comes to the time that she spends with the family, they often seem to treat Cleo as just the cleaner. The dad seems to just expect Cleo to do even more than she already does, being one of the obvious points to support this. The dad’s thought on this is clear when he complains about how there’s always empty cartons in the fridge and dog poo all over the floor.

Ultimately though, Cleo ends up showing how incredible a person she is with the family by connecting with them on an emotional level, in a better way than the kids seem to connect with their own father. The father, in fact, seems to contrast rather interestingly with Cleo, because he seems to be the main father figure that the kids want to look up to, but don’t really see him enough to do that. In the moments of the film where their father has gone away, they seem to be so focused on that fact so that they don’t realise that it’s not just blood that makes a family, it’s the dedication to looking after the kids, and doing things for them to connect with them that makes one, which the father fails to do, as far as we see. When the mother relays what the father has said about meeting the kids again after he splits up with the mother, she says that he will see them at “some point”, not giving them a time, and seeming like he’s not really bothered.

Whereas, when it comes to Cleo, despite all of the personal issues that she has to deal with, including her own child dying in childbirth, and her partner abandoning her because of the pregnancy, she still goes out of her way to spend time with the kids of the household she works for, and even save their lives when they need her the most. Alternatively, we don’t even see the father again after the beginning of the film, and even the mother seems significantly desperate to see her husband, but it seems increasingly clear that he just doesn’t care.

The film shows itself to definitely be worthy of the awards it both won, and were nominated for, because of some of the incredibly clever camera angles that the director chooses help to make something emotional without over dramatizing it, which makes it feel more natural. But also, the clever use of first-person shots that make certain characters feel closer with each other, and make us as an audience feel closer to them. For example, when Cleo has to watch her child get take away from her, the camera remains still focusing on Cleo as she watches what the doctors are doing with the baby, so we can keep our attention focused on her and the baby in a natural way, that almost makes us feel like we’re actually there. And the shot when Cleo’s partner/boyfriend is holding her hand after they’ve slept together, the camera uses a first-person view of Cleo holding her boyfriend’s hand, which again makes us feel close to the characters.

So anyway, during the first half an hour-ish of the film, we see how Cleo lives her life outside of her work, connecting with one of her friends, and going out with a guy who studies martial arts, after he loses his parents (or did they abandon him?). This character interested me, because right after Cleo announces to him that she is pregnant, he runs off to another part of Mexico. Which is sort of ironic but also maybe even shows the effect of being abandoned can have on a person when they’re faced with the responsibility of raising a child themselves. This character even threatens to hurt the baby, and Cleo, if she tells him that the child is his and again, ultimately, I think it was the fear of his own failure as a parent that drove this attitude. 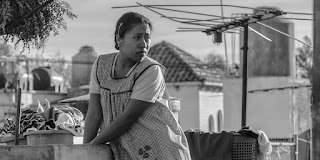 It was this kind of suffering in Cleo’s life that drives her away from living a happy personal life. After all the suffering that she endures, because of the death of her baby, she continues to serve as the family’s maid, despite everything. And when she becomes convinced to go on a field trip of sorts with the family whilst the father goes to pick up his things from the house, the family continue to see her in a different way to just a maid of the house. I say “continue” because it seems obvious that after the loss of the baby, the family start to show a large amount of empathy for Cleo, and I think another part of the reason why the mother encourages Cleo to come with them, is because the father was coming to pick up his stuff, and she didn’t want Cleo to see this, and be emotionally worse off because of this. That shows us as an audience how much the mother truly considers Cleo’s feelings now, despite the mother’s own problems. The way the mother sets her own problems aside to be there for Cleo shows Cleo’s own impact on the family and the mother herself as well, because throughout the film, even when Cleo is pregnant, she continues to serve the family, even after having to deal with being abandoned by her first ever sexual partner that she clearly had feelings for, and ultimately losing her baby.

Also, during this field trip they go on, we truly see Cleo’s personal life become her work life. This starts to become a bit more obvious when the mother starts holding “family announcements” with Cleo involved, when previously she seemed to use Cleo to call over the family for the meetings, showing how she doesn’t truly belong earlier in the story. She seems to be truly trusted with the family throughout the whole film, and despite this they don’t truly treat her like she “belongs”, earlier in the film. But the point when things really start to build up is when the mother goes away to start the car and they’re just about to leave, then the children insist on staying a little longer and the mother obliges them. The mother though, mentions how they need to stay by the shore because Cleo can’t swim if they get into any danger. Of course, with them being children, they don’t listen, because at the end of the day children just want to be children and the inevitable happens. However, because the mother doesn’t see what’s going on, Cleo goes into the water, and almost drowns as she fights the growing tide to find two of the children and bring them to shore.

After the mother comes back, and Cleo brings them all back safely, the family feel closer to Cleo than ever. And when they get home, you don’t get the same feeling of their being separation between the family and Cleo, and they certainly don’t have a professional work relationship with her anymore. Because essentially at this point, she is practically the definition of family member, because the family were willing to look out for her when she was dealing with her own loss, and had even comes to accept that she didn’t really want to have a child, after she loses it in birth. And alternatively, of course, she does so much for them.

And that’s what makes a family a family. If you’re willing to look out for someone, as much as they’re willing to look out for you, then you should consider them family, and at the end of the day it has nothing to do with blood. I think, with Roma, the creative vision of the director was clear and ingenious, with a lot of thought put into every scene and every shot, making the cinematography look incredible, and also making everyone involved, and the film itself, award worthy.