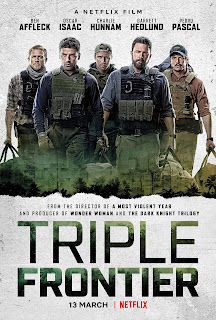 I have had a love hate relationship with the products available on Netflix recently. I’m yet to find a television show from Netflix that I haven’t enjoyed, however their film output has annoyed. On occasion you get a stunner like one of my films of 2018, Mute from Duncan Jones, but more likely you’ll get an Adam Sandler bad joke fest or a Will Smith fairy slash cop messy attempt at science fiction. I shouldn’t be surprised, major studios are as hit and miss as this as well but, for some reason, I find myself holding Netflix to a higher standard. Despite their privacy over figures, the click bait million dollar headlines have raised my expectation levels and I guess I’ve bought into the hype. Mute I was excited for, as I’m huge fan of Jones as a filmmaker, but often what’s on the menu doesn’t match the quality you receive. The menu for Triple Frontier contains the following information...

Directed by Margin Call’s J. C. Chandor, written by The Hurt Locker and Zero Dark Thirty’s scribe Mark Boal, with the juicy fingerprints of Kathryn Bigelow, through her role of executive producer, and starring Ben Affleck and Oscar Isaac.


Sounds incredible, doesn't it? Still haven’t pressed play yet though, due to the whole Elite Soldier/Special Forces genre usually being more boobs and bullets than story, with the aforementioned films from Bigelow being the exceptions to that rule. Affleck himself can be hit and miss on occasion and Charlie Hunnam, despite bags of talent and potential, seems to always drop the ball in his choices. This is either going to be epic or straight to video trash, I’m nervous but what the hell let’s do it.

Five former Special Forces operatives reunite to plan a heist in a sparsely populated multi-border zone of South America. For the first time in their prestigious careers these unsung heroes undertake this dangerous mission for self instead of country. But when events take an unexpected turn and threaten to spiral out of control, their skills, their loyalties and their morals are pushed to a breaking point in an epic battle for survival.

Okay, that was incredible. Yes, it had some action machismo moments but they were actually plot essential and this was more a human story of friendship, grief and overcoming extreme odds. It was most definitely a Boal script with all the beats and twists you’d come to expect from Zero and Hurt Locker. It's also most definitely a Chandor film, concentrating a large element of the film on the effects of greed, but it flowed tight like a Bigelow film and if I didn’t know it was Chandor I’d have guessed it was a Bigelow film and I can’t think of a higher compliment to pay it than that!

Affleck was his brooding best as Tom ‘Redfly’ Davis, the character whose arc went from caution to greed at all costs the most, with Affleck nailing every moment. Isaac as heist originator Santiago ‘Pope’ Garcia was excitable and emotional and a bit of live wire which suited his character perfectly and Hunnam’s performance as William ‘Ironhead’ Miller was the most impressive I’ve ever seen him, as was Garrett Hedlund who played his brother Ben Miller. It was the magnificent Pedro Pascal as Francisco ‘Catfish’ Morales who just slightly stole performance of the film for me though, highly watchable throughout.

Triple Frontier will split opinions I guarantee it. Those who expect boobs and bullets from their action movies will be left disappointed; whilst the action scenes are executed with aplomb they are a small percentage of the two plus hours of screen time. It’s the plotting and interpersonal relationship moments that impact highest from viewing so if you prefer your war genre films more story-based then this is definitely for you.

The locations are as stunning as the writing, the performances as marvellous as the look of the film. This is exactly the kind of project that Netflix need to do more of. This could have had much studio interference and been made more typical of this genres output and I can see every scene play out in my head if a studio had chased that marketability but Netflix don’t do that, they buy a filmmakers vision and let them get on with it. The result is Triple Frontier which was one of the best Netflix movies since Mute.