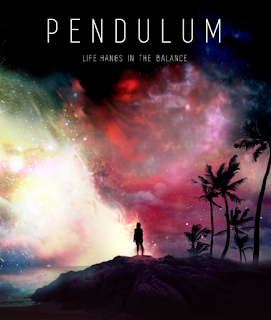 Everything hangs in the balance as Susan Omand watched the sci-fi short film Pendulum...

Thirty years ago the Hubble telescope detected a gravitational "rip" at the edge of the galaxy. The global scientific community predicted that this cosmological phenomenon would one day destroy the Earth.

A generation was born knowing the world was going to end in their twenties. Their time is nearly up...

What a fascinating premise! I must admit it was that and the glorious poster that first drew me to watch this short film created by and starring Lauren Cooney. She plays Cerys, one of the twenty-somethings who are to witness the end of the world. When the rip in the sky becomes visible for the first time, Cerys and her boyfriend Gwylim (Scott Michael Wagstaff) leave behind the drug-fuelled apocalyptic partying/rioting of the UK and head for India, where the end of the world is being celebrated. Along the way they meet the charismatic Derryk (Tom Sawyer) the leader of a rural commune of travellers who have gravitated together to meet their maker in a haze of peace, love and harmony... or maybe not.

The first thing I must say is that the cinematography and effects in this film are amazing! True, having the glorious colours of India as a backdrop always helps, but even the scenes filmed in the UK had a very atmospheric colour palette and the contrast between its cool monochrome with the spice coloured warmth of India made for rich viewing. Also the sky effects looked incredible. There’s always a danger, especially with lower budget short films, that digitally created effects end up just looking tacky but these were highly believable as well as being stunning to look at.

So much for the scenery, how was the story? It was okay; the usual “end of the world cult” trope with the added dimension of it actually being the end of the world. Cerys and Gwylim were credible as a couple and balanced each other well, she the out-going free spirit and he the more down-to-earth reserved one, with the commune leader Derryk being suitably insidious. Without giving spoilers, the final scenes were clever and unexpected although, being a short film, there wasn’t really the time to give it the emotional build-up and intensity that it really needed so it felt a bit rushed. However, apparently, this short film is a proof of concept for a feature length film in development so this could easily be rectified.

One other tiny point that irked, although it may just be me, was that I found the subtitles at the start of the film very difficult to read due to the colour choice of an earthy orange on top of the reds and browns of urban India. So I hope they didn’t say anything important.

All in all though, Pendulum is a film worth watching if you get the chance because the fantastical skies and the real Indian landscape are both beautiful.