Book – All My Colors 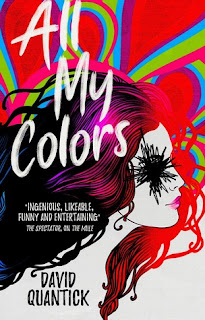 Thanks to Titan Books, Steve Taylor-Bryant writes a review that hasn't been written before about All My Colors by David Quantick...

It is March 1979 in DeKalb Illinois. Todd Milstead is a wannabe writer, a serial adulterer, and a jerk, only tolerated by his friends because he throws the best parties with the best booze. During one particular party, Todd is showing off his perfect recall, quoting poetry and literature word for word plucked from his eidetic memory. When he begins quoting from a book no one else seems to know, a novel called All My Colors, Todd is incredulous. He can quote it from cover to cover and yet it doesn't seem to exist.

With a looming divorce and mounting financial worries, Todd finally tries to write a novel, with the vague idea of making money from his talent. The only problem is he can't write. But the book - All My Colors - is there in his head. Todd makes a decision: he will "write" this book that nobody but him can remember. After all, if nobody's heard of it, how can he get into trouble?

As the dire consequences of his actions come home to both Todd and his long-suffering friends, it becomes clear that there is a high - and painful - price to pay for his crime.

I think I went into this book with far too high an expectation, due to how funny I normally find the work of author David Quantick, because All My Colors is not the hysterical, laugh out loud comedy I thought it would be. It is, however, really funny in a dark, "you hate yourself for laughing," kind of a way.

The book starts by thoroughly introducing you to the character defects of its main protagonist, Todd Milstead. Milstead is exactly what the blurb warned you he would be and, after the first couple of chapters, I was left wondering if this book was for me as I had no connection to Milstead whatsoever and therefore found it hard to get gripped by the story. Then we had a section of the book that covered the way Milstead wrote All My Colors and I was in love with style of the writing, reminiscent of my younger years reading some of the less horrific Stephen King books, it was fun and intriguing the way that Needful Things was. Todd gets his book deal and embarks on a tour and again the book started to sag slightly with a painfully detailed journey around America as an author and I was left thinking that maybe I was right at the start and this book is not one I was going to enjoy. Then I got to about page 198 and something clicked with me about what All My Colors was, about what was likely to happen next and I consumed the rest of the book in what felt like a matter of minutes. I was gripped. It was intriguing watching all the strings that Quantick had set out at the start begin to be pulled and the show began for real. That final section of the book was astonishing and wouldn’t have worked without what felt like padding in the middle while I was reading it but was actually very smart writing, almost too smart as I very nearly gave up.

David Quantick’s novel is great in the end. It shows that a story's hero is maybe not necessarily an actual hero in traditional terms, just maybe a heroic figure in his own head, and it’s a brilliant satirical look at duplicity wrapped up in a comedic horror novel. I think perhaps I was not smart enough to know what was going on but, come the end, I was glad that I stuck with it because it as it turned into a clever, funny, and moving novel.

All My Colors is released on 16th April