Book - Sky in the Deep 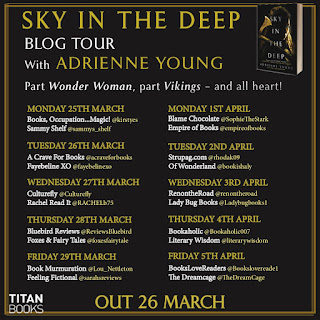 Thanks to Titan Books, we're excited to be the last stop on the blog tour for Adrienne Young's novel Sky in the Deep. To give you a taster, here's a short extract from the book itself...

I remembered the way my father looked at Iri and me when we held the funeral rites for our mother’s soul. I remembered the way his eyes said that we were everything. We were everything until Iri was gone. And then the sun of my father’s world grew dimmer again, still rising and setting on me. I’d become both his son and his daughter, carrying his name and honor. It was a heavy mantle, but I was the only one to bear it. And I knew that though he’d never say it, some part of him held me responsible for Iri’s death. Because I was.

I was his fighting mate and that made him my responsibility. It was my job to keep him alive. I should have given my life before his could be taken. The guilt haunted the shadows of my every dream. He was there, in every nightmare. I’d gone into the fighting season, ready to avenge my brother. But Sigr was waiting for me in Aurvanger, ready to pour out his wrath upon me. And now I was being punished for my weakness.

I had failed. I knew that the moment Iri went over the edge.

The Tala brushed a strand of hair from his face before he turned back down the aisle. I watched him, the pride spread over his face like sunlight. I brushed a tear from my cheek, and a feeling like a finger dragging over my skin made me blink. I looked up to where the Tala stood, and for a moment, I thought her eyes were on me.


Thanks again to Adrienne Young and Titan Books for allowing us to share this extract. Sky in the Deep is out now.