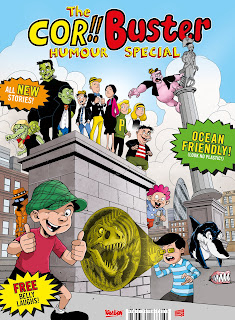 Susan Omand regresses to her youth and lies on the floor to read the Cor! and Buster Special, out now from Rebellion Publishing...

When I was wee, probably about 9 or 10 so that would be late 1970s (eep,) Friday after school meant a trip to the newsagent to pick up my weekly comic order and a quarter of sweeties for the weekend ahead. The sweeties varied depending on the week I had had – sometimes it was the comfort of chewy chocolate eclairs, although, since they were quite heavy I didn’t get many of them, or I could get a lot more sweets if I went for the smaller, light and zingy acid drops – but the comics were always the same, a Buster and a Whizzer & Chips (no I wasn’t the girliest of girls.) So, when I heard that Rebellion were bringing out a Cor and Buster special I had to take a look.

And I wasn’t disappointed! It immediately took me back to my childhood and reminded me of the summer special comics you used to get back in the day, the ones in colour on shiny paper rather than printed on newsprint, with puzzle pages as well as comic stories to keep us entertained on rainy holidays. Yes, this Special has a puzzle page too and I must admit the Spot the Difference took longer than it probably should have done although I got through the maze without starting at the end and working backwards. I didn’t try the Sudoku though, because we didn’t have them “in my day” so that doesn’t count (my excuse and I’m sticking to it).

As for the comic strips themselves, I was amazed to find characters that I recognised – Sweeny Toddler (the demon baby), Gums (the shark with no teeth), Face-ache (the boy with a thousand faces) and many more – and the stories were just as much stupid fun as I remembered. Some had been updated a bit of course, Simon Cowell features in one, the Baby Shark song pops up in another (no, not the shark story) and there’s smart phones and such in others, and some of the stories had a subtle moralistic approach which I don’t remember from way back. Others though are completely timeless while still feeling fresh and funny, so I couldn’t tell if they were new or archive stories, which was a great thing. There were also a few new additions to the characters that I didn’t remember from *mumble mumble* years ago, like the wonderful Swines of Anarchy which I’m going to have to seek out more of as biker gangs of pigs vs mandrills is definitely a great idea.

As it’s Easter weekend, I have to also mention the Easter Eggs that I spotted (spoiler warning if you want to find them yourself) but I loved the fact that the shark tagging boat was called Shippy McShipface, the band in Hire a Horror were The Ramoaners, Mr Stinkerton of Stinkerton’s Detective Agency had a Live Aid mug and was that really Tin-Tin and Captain Haddock on the moon in the Kid Kong story? Neat!

So there’s plenty for all ages here, as those of us of a certain age will get a nostalgia hit from recognising the original characters that haven’t been messed around with too much, and kids will enjoy the silly slapstick and toilet humour that I too laughed at when I was 9 (and sometimes still do). There’s nothing risky or risqué in any of it, the “horror” is suitably silly and the only real violence is in the strength of the fart stench. Which are, it seems, pretty violent at times. But all very good fun!

The 48-page special is out now in newsagents and comic book stores, retailing at £4.99. Worth EVERY penny, but make sure you still have enough for your quarter of sweeties too.