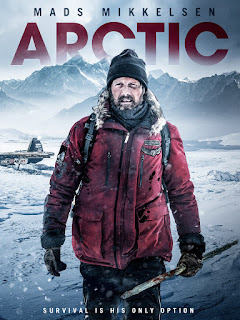 Ren Zelen came in from the cold to watch Mads Mikkelsen star in Arctic...

Any film which promises to show Mads Mikkelsen having a run-in with a bear could expect to gain a certain notoriety. However, Arctic, the first feature from the Brazilian YouTube and advertising filmmaker Joe Penna, isn’t interested in that kind of spectacle.

Penna, who co-wrote the screenplay with fellow newcomer Ryan Morrison, offers an austere examination of the hard, repetitive slog of trying to stay alive after surviving a plane crash in the frozen wastes north of the Arctic Circle (in reality the frozen wastes of Iceland).

Arctic proves to be a survival drama with a succinct and simple premise. It follows Mikkelsen’s character (listed in the credits as Overgård) going about basic daily tasks. These he has divided up into a strict routine keeping to the alarms he has set on his watch.

The film opens with him clearing snow which, in an overhead shot, is revealed to be from a giant S.O.S. sign carved into the ground, in case a plane should fly close enough to catch sight of it.

When his watch alarm rings he moves on to his next task - hand cranking a wind-up transmitter system in the hope of catching a signal. He makes sure to check the fishing poles he has constructed over holes in the ice to catch fish in the frigid waters. He spends time correcting a makeshift map he has drawn.

Dividing up his day and sticking to allocated times by his watch alarm keeps him focussed and disciplined. Presumably it serves to take his mind off his predicament and its loneliness (we are never told how long he has been stranded). One tense moment has him trying to avoid giving his scent to a hungry polar bear which he spies wandering around in the far distance.

The point would seem to be that this man concentrates solely on surviving from one day to the next and is aware that giving in to despair or frustration might be more damaging than avoiding a bear on the hunt.

He continues waiting patiently for a passing plane to spot him, so when his transmitter bleeps into life and he sees a helicopter passing overhead his hopes for a rescue are reawakened. Tragically, the chopper loses control in the midst of a storm and instead it crashes nearby. 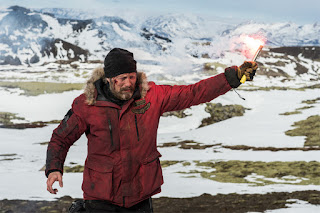 All Overgård can do is trudge across to the wreckage to see what he can retrieve. He finds the pilot already dead, but the female co-pilot, (Maria Thelma Smaradottir) is seriously wounded but clinging on to life.

Overgård salvages some medical supplies, some dried noodles and a precious cigarette lighter and puts together a makeshift sled out of the helicopter door. He now determines that he must care for the survivor as best he can.

Back in the shelter of his own downed plane, during one of the woman’s fleeting moments of semi-consciousness, Overgård promises that he will take care of her. However, the medical supplies he took from the crashed helicopter are limited.

He has to make a choice between staying inside the relative safety of his own wrecked plane and continuing his survival routine, or seeking help by venturing into the treacherous frozen terrain further north, where an actual map he has found shows the location of a remote outpost.

Cinematographer Tómas Örn Tómasson uses the severe, empty landscape to enhance the story of man against nature. The shot of Mikkelsen receding into the distance of the barren snowfield, tugging the sled carrying a barely living woman, illustrates the struggle of a lone human striving to overcome the vastness of nature’s obstacles.

The film has minimal dialogue and is basically a one-man-show. Mikkelsen rises to the challenge giving a committed and physically demanding performance. We note that Overgård has a remarkable level of stamina and endurance, rudimentary medical skills and stoic determination, but although we sometimes see him deep in thought, we learn nothing about his past or his inner life.

The film relies on Mikkelsen’s power of expression. There are telling moments where we see the chinks in his armour of fortitude and self-sufficiency. The actor’s weather-beaten face gives away the fragility of his stoicism simply in the way he joylessly chews on his meal of raw fish, or, when he holds the injured woman in his arms just a little bit too long – not in a sexual way - but momentarily savouring the relief of again being in close physical contact with another human being.

Mikkelson’s subtle portrayal makes small triumphs seem like major successes, as we witness Overgård’s delight in catching a huge Arctic trout, or taking simple pleasure in warming his hands over a paraffin stove.

Sadly for Icelandic actress Maria Smáradóttir, she spends most of her time comatose or as a well-wrapped-up head peeking out of a sleeping bag, but at least we can be thankful that the film doesn’t fall prey to the tired and unrealistic old formula of a miraculous recovery followed by a burgeoning of romance between two characters.

What Arctic may lack is an insight into the central character to provide us with more reason to engage with him emotionally. Mikkelsen’s Overgård is never given a backstory - he serves as a kind of ‘everyman’. We know nothing about his inner life, his process of learning to survive alone or what he might do if he were rescued. Our observation of his struggles sometimes merely holds a kind of detached fascination. It’s a tribute to Mikkelsen’s skill that we become involved in his plight and root for him as much as we do.

Thanks to this fortunate piece of casting Arctic is able to deliver the occasional moment of raw emotion and tension. It proves to be a very respectable, if conventional, example of the survival-against-the-odds genre - one man pitted against nature. All in all the film is a remarkably well thought out, realistic and assured first feature from director Penna.