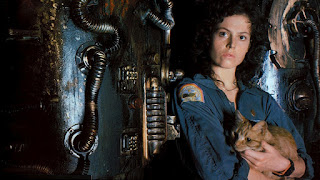 They say "In space, no-one can hear you scream." No screaming is heard here either as Alwyn Ash explains his love for the Alien franchise in his article titled Ash vs Alien...

Many franchises seem to be a divisive issue these days, you can't afford to have an opinion without someone wanting to tear your soul apart. Thankfully fans aren't Cenobites, so no blood loss or physical torment. Mentally and emotionally, however, can be quite draining if you let it. The problem arises from passion, we're all passionate about what we love. And franchises are deeply loved by fans. So much so that many can't accept changes to their movie or television series, or embrace something that doesn't fit in with established continuity. They want more of the same, or complain that it is too much the same and when given a radical shift from the norm they complain that it's too different, and want more of how it was before.

Being a director can be a thankless job these days.

I've been obsessed with the Alien franchise since the late eighties, having watched Aliens (1986) for the first time on VHS. It was a breathtaking ride of sci-fi and horror, with plenty of action and state-of-the-art special effects. I had not seen anything like it. The Xenomorph was the stuff of nightmares, as it had meant to be. We were introduced to Hadley's Hope, a small colony on the moon of Acheron (originally named LV-426) after it had fallen prey to the aliens. Ellen Ripley (played superbly by Sigourney Weaver) was persuaded to return to the moon where it had all began for her - in Alien (1979) she had first visited LV-426 with the crew of the commercial space tug USCSS Nostromo, a nightmarish mission that would later see the deaths of everyone except Ripley.

While on Acheron for the second time, Ripley encounters a young survivor, a girl named Rebecca Jorden, known to everyone except her brother as "Newt". They immediately form a bond. This is one of the parts that I like most about Aliens, and Carrie Henn's performance is outstanding. "My mommy always said there were no monsters - no real ones - but there are, aren't there?"

Following this viewing, it was inevitable that I would delve into Ridley Scott's original 1979 masterpiece sooner or later. Funnily enough, compared to the busyness of Aliens, its predecessor felt a little... bare. One alien, no weapons at the crew's disposal except for flame throwers. It was a fun experience, though not one I warmed to instantly. In truth, I had been spoiled by the sequel, and had to learn to accept Alien on its own merits. This I eventually succeeded in doing, and I now regard the first movie as one of the best in the franchise. 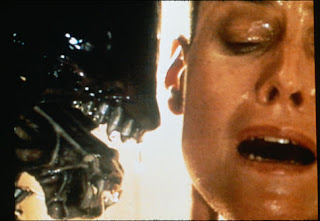 In 1992 came the third and final instalment in what I regard as Ellen Ripley's trilogy: Alien 3, directed by David Fincher. This is where fans are split in their support and admiration. Many people have felt that it was wrong, insulting even, to kill Newt and Captain Dwayne Hicks off screen, instead casting Ripley to a prison colony to face off against yet another single alien creature. Surely two of the most popular characters from Aliens deserved better? Well, as much as I adore Newt, for me the first three movies were always part of what I refer to as the 'Shakespearean tragedy of Ripley', for it was Warrant Officer Ellen Ripley who was destined to be haunted by this nightmare as her life unfolded beyond her control.

Her daughter, Amanda, was only 10-years-old when Ripley took a job that would ultimately lead her to LV-426 (Alien). First tragedy, the loss of the Nostromo crew; third tragedy, returning home to Earth 57 years later after her "lifeboat" the Narcissus was found drifting through space by a passing salvage vessel, and learning that Amanda had grown old and died (Aliens).

Notice I skipped something? If you are at all familiar with Alien: Out of the Shadows (the first in a published canonical Alien trilogy) you will know that Ripley had actually been awoken thirty-seven years after her Nostromo incident, by the crew of the DSMO Marion orbiting LV-178, also called New Galveston. They, too, are being plagued by Xenomorphs and the reality of their situation, Ripley discovers, is that the vessel will burn up in the planet's atmosphere. Their only hope: the Narcissus! To complicate matters, they must replace the shuttle's empty fuel cell by going down to LV-178 to obtain fuel from a mining colony. On the planet surface - why is it never easy? - they face further aliens. You might be wondering why Ellen Ripley never recalls this encounter in further movies? Well, read the book and find out. Her experiences on the Marion is the second tragedy.

Fourth tragedy, the massacre of Hadley's Hope and the marines that accompany Ripley to the moon. Newt is Ripley's connection to the colony, as we learn that the girl's family was killed (you can learn more about the fall of Acheron in Christopher Golden's Alien: River of Pain novelisation). There is a beautiful mother-daughter relationship between the two, especially when you realise that they have both suffered loss. Though not a replacement for Amanda, could Newt become the child that Ripley needs? This finally leads to tragedy five and six: Newt's off-screen death and Ripley's sacrifice (Alien 3).

It is clear that our protagonist was never meant to meet a happy ending. Those that she loved were taken from her, hope quickly snatched at every turn. And all because of the alien...

Alien, Aliens and Alien 3 (and Alien: Out of the Shadows) combined tell the extraordinary tale of a curse. This becomes even more significant when you take into account Alien: Isolation, a story that explains Amanda Ripley's own encounter with the Xenomorph. And don't get me started on Alien: Sea of Sorrows, this is when things just get weird...

I've omitted Alien Resurrection as this movie features Ripley Clone 8, and not 'the' Ellen Ripley. This is a different story entirely and one that deserves its own article.