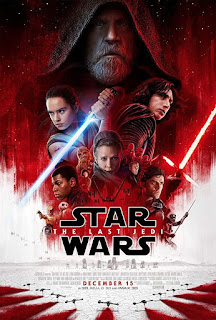 I know I’ve already written about this film once before (read that article HERE), though I think I may have been a little too consumed with the hype of a new star wars film to give a fair evaluation of it. I think it’s best to analyse this film one more time, looking at the good and the bad once again, seeing as Chicago's Star Wars Celebration is coming up, and we’re likely to get a teaser of sorts during the Episode 9 panel. I’ve talked already about the characters and how they’ve developed, which to me is the strongest part of the movie, but there are some parts that I didn’t even notice during the first few watches that I’d like to take a look at here.

First let’s recap on what The Last Jedi is actually about. The film starts not too long after its predecessor, Star Wars The Force Awakens. The resistance is attempting to escape their base on the Ileenium system, with Poe, their best pilot, at the helm of their distraction as they do so. During this, the goal is to generally clear out the turrets on the dreadnought ship, so that the Raddus (the resistance's largest ship), can escape into hyperspace with fewer issues. As the film progresses, Poe decides to order their bombers to finish of the dreadnought, almost causing the resistance to lose the Raddus in the process, along with many more ships. Eventually they do destroy it and escape to hyperspace. Though, when they do, they discover that the First Order can track them through lightspeed, and they appear out of hyperspace moments after they do. So, this part of the film seems to focus on them outrunning the first order by moving their ship as far as they can without going to hyperspace, using their shields to protect them for as long as they can, and this part of the film relies on the tension of the rebels wondering what their plan is.

While all this is going on, we also have the storyline of Rey going to the island to see Luke Skywalker, and the story of Finn and Rose going on an adventure to find a hacker who can shut down the First Order’s tracker. People have come to believe that this plot point of the film is somewhat pointless, though I believe it to be essential to how Finn and Rose develop. Because, at the start of the film, Rose decides to stun anyone that tries to escape the ship, it shows that she’s thinking too much as a soldier, and not enough like a person. And it's only by again seeing how badly others are suffering that she realises that she would be as bad as the enemy if she didn’t give others the option to run. Finn’s evolution is the complete mirror of this, with his goal being to run away, before seeing the worst people in the galaxy when their mission takes them to the Canto Bite casino. It was this mission that made him realise how desperate everyone is, and the importance of fighting for what you care about.

During the time that Rey spends on the island with Luke, the audience is intentionally misled from the ending of The Force Awakens, though in the best way possible. The island scenes of the movie prove to be the best of the film, in my opinion, from the moment when Luke tosses away the lightsaber that Rey hands to him. 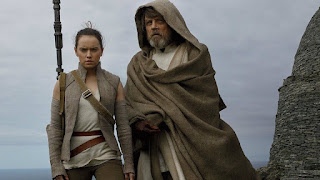 It is at this point we realise that this isn’t the Luke that we remember. Though this is a Luke that, I would say, is very similar to Yoda, in the sense that he hid away in seclusion because of his failures, although, unlike Yoda, Luke has seen the hypocrisy in the Jedi order, the fact that the Jedi are in fact the soldiers (no matter how much they told others that they were not). Like Jedi master Mace Windu said “we are keepers of the peace, not soldiers”, however, they fought in wars following the exact episode where he states this and, because of this, led the senate to question their motives and side with Chancellor Palpatine, eventually giving him the power to make himself emperor. I think this side of Luke is brilliant, because this makes him more of a Jedi than pretty much any of the Jedi that came before him, the fact that he recognises the flaws in the old Jedi order, though out of his own shame and lack of faith, refuses to act on it. That shame being when he was thinking too much like a warrior to consider his actions when going to confront his nephew about the darkness, he was sensing in him. Luke’s one major flaw in this movie is that flat out refusing to find a way to keep the piece without fighting is not the right thing to do.

What’s truly clever is how Rey is used during the time on the island, to show exactly why Luke believes that the Jedi disrupt life and cause more harm that good. During scenes like when Rey uses her staff to train, it shows that there are peaceful weapons like a staff that can help resolve situations. We’ve seen this with the character of Chirrut Umwe, one of the “guardians of the wills” who helps the rebellion retrieve the Death Star plans. He is an example of a force manipulating character that is peaceful and seems to find more peaceful solutions than the Jedi seemed to. However, when Rey decides to equip Luke’s old lightsaber, and start training with that instead, she causes damage to the life around herself, destroying a rock, and knocking a delivery cart of sorts, off the cliff. I think that was done to show us one of the reasons why Luke thinks the Jedi should end, because it shows the harm to living things that a Jedi could cause. And in the scene where he just tries to teach her about the force that exists between all life, she is tempted by the dark side in one of the areas of the island. This is another instance that leads to the rocks around her being shattered, showing the damage that any force user is capable of, and that is what Luke is afraid of. Luke is afraid of the fact that any Jedi can be so easily tempted to the dark side, with even himself being a good example, as he was clearly fighting an urge to kill his own father in episode 6, and the same with his nephew. And of course, Anakin Skywalker was another example of a Jedi that turned Sith, and ended up nearly bringing the Jedi to extinction, and causing the empire to rise. So, the fact is, the same exact thing happened to Luke’s Jedi order, giving way for the first order to rise, and Luke realises this to be a vicious circle, and believes now, that leaving this fight to the people of the galaxy is what is best.

I think that is what is so clever about Luke’s character in the film and the way the plot is written around him, to even link to this episode in particular is brilliant. One of the things that Luke realises though, after being informed of it by master Yoda, is that failure is the greatest teacher, that we can learn from our mistakes and adapt because of them. And I think that from this, Luke becomes a better Jedi than most Jedi before him. I say this because following his visit from Yoda he does the most Jedi thing possible, he shows up when the resistance needs him most and inspires them, not only that but he distracts the first order without hurting anyone.

Now in other terms of what is a little more questionable about this movie as a whole, are the moments in the movie where director Rian Johnson seems to favour what makes a good shot over what makes a little more sense in the wider terms of the story. The biggest moment that I can think of where this is the most obvious is when Finn attempts to try and sacrifice himself to stop the battering ram cannon that is about to break open the resistance’s door. In this moment, you can understand why he is doing what he’s doing, and we can see little chance of him not accomplishing this task, that’s why I believe that in this circumstance Rose wouldn’t have interfered, or an alternative would be to have walkers nearly shoot Finns speeder to pieces, making it seem a little more clear that he may not actually succeed. Therefore, it would make Rose saving his life a little more justified, as he would have been trying to sacrifice his life for nothing, but the fact that he was willing to sacrifice itself would still hold the same value.

I think another example of one of those instances, is the way Leia so flawlessly seems to save her own life through the force. Now this was a moment that always came across to me as a little cheesy, and I think that in terms of the story this also doesn’t seem to make much sense, considering Leia has had such little training, and is able to even sustain her own life through the force. I think that a better way to do this could have been similar to how saving someone in space has worked in legends. In legends there have been instances where people have been saved by droids being sent out to save peoples lives who are floating in space. Now I think that the fact that the force is inside her could help to keep her alive long enough for a droid to save her, and it would make a little more sense to the story, and to make it make a little clearer to the audience, the medical droids could say that no “ordinary being could survive out there for so long”. This would make the story make more sense and avoid the issue that is presented through this scene in the film.

So overall, I think this film was fantastic in presenting the character of Luke Skywalker and making it clearer to us as an audience that at the end of the day even heroes, can fall to their lowest. And sometimes they just need to be torn down to be raised back up, and that’s what happens to Luke in this story. When it comes to some scenes in this film where the beauty of the shot is considered over what makes sense, unfortunately, what makes sense has to come first. I don’t believe that the amount of hate this film receives is justified because its still an incredibly enjoyable film to watch, though I don’t believe it can surpass Empire Strikes Back, because of the slight inconsistencies it creates.