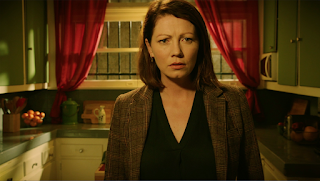 Currently doing the rounds of the film festivals, will Susan Omand be sorry for watching the short film Sorry, Not Sorry by writer/director Monique Sorgen...


Sorry, Not Sorry is only just over 7 minutes long but manages to tell years’ worth of family background in that time with an, on the surface, simple linear plot and very little dialogue.

Without giving too much away, the story is inspired by a 1934 poem called This is Just to Say by the American poet, William Carlos Williams. In the film, we have Harry (the wonderful Wallace Langham, Hodges in the original CSI series) his wife Abby (Jessica Oyelowo, Sleepy Hollow) and the man’s elderly father (M Emmett Walsh, who has basically played character roles in everything from Blade Runner to Damages) living in the same small, over-heating house. Harry and Abby juggle busy lives, hardly ever crossing paths, even for meals, while Harry’s father needs round the clock care from both of them, although that doesn’t stop his incessant complaining from his easy chair in the sitting room. Late one particularly hot evening, Harry finds and eats a bowl of chilled plums that Abby had in the fridge. Obviously feeling guilty, he leaves her a note, apologising but saying how wonderful the fruit tasted. Needless to say, when Abby gets up early the next day and goes for the plums for breakfast, she’s not too happy finding only a note and some plum-stones in the bowl in the fridge, so exacts some sweet revenge. This tit for tat retaliation escalates quickly, with the vengeful acts always communicated to the other by notes on the fridge. All the time, Harry’s father just keeps constantly whingeing in the background…

Even though there’s not a lot of dialogue in this film, the writing, acting and directing were all absolutely top notch. To be able to interlink, and convey, such richly expressed characters in such a short space of time is incredible and the story itself, although simple on the surface, is so cleverly put together that you feel like you’ve happily watched an hour’s worth of Tales of the Unexpected; the film had the same feel as that TV series from way back. Away from the people, the cinematography is sublime and the set dressing perfectly suggests the type of household it is, even before anyone speaks. That clock is gloriously retro! And the little tinkly theme tune has just the right kitschy quality to unsettle you.

And then you see that final note on the fridge… just wow!

If you ever get the chance to see this short film, watch it. I guarantee you won't be sorry.