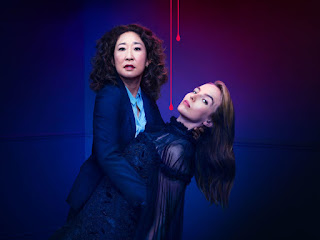 Season 2 of Killing Eve premiered on BBC America last night. For those of us in the UK who have to wait a bit yet, here's some of what we know so far about the new season (with some S1 spoilers)...

Going by the way the first season air-dates went, it could be as late as September before we get to see Season 2 here in the UK, although there are rumours that we "may not have to wait so long" this time.

So here's where we left off:

1. As the clip above said, the new season will pick up a full THIRTY SECONDS after the end of Season 1. So all that stabby cliff-hanger stuff will get resolved soon... or will it?

2. Who's in and who's out. Sandra Oh and Jodie Comer will reprise their lead roles as Eve Polastri and Villanelle, respectively. Fiona Shaw is back as Carolyn Martens, who heads up the off-the-record MI6 team searching for Villanelle and Sean Delaney will return as Eve's assistant, and Martens' son, Kenny Stowton. We can also look for Eve’s doting husband, played by Owen McDonnell. Sadly, Bill Pargrave (David Haig) and Frank Haleton (Darren Boyd) were both killed off. And that leaves Konstantin (Kim Bodnia), Villanelle’s handler. At the end of season one, Carolyn informs Eve and Kenny that he had died from a gunshot wound but is this true? New to the cast for Season 2 though will be Nina Sosanya (W1A, Marcella, Silk) as an MI6 agent, named Jess. She is just as clever as she is experienced. And we can also look for Edward Bluemel (A Discovery of Witches) as Hugo, who works in the Counter-Terrorism department in MI6, thanks to getting a job there because of who his dad is.

3. The show's writing will be in new hands. Emerald Fennell (Call the Midwife) will be taking over as lead writer for Phoebe Waller-Bridge. Fennel joined the series prior to season one airing, so that helped take the pressure off in creating season two. At the Television Critics Association press tour this past February, Fennel said, “I’m lucky in that I came on board before the first season came out, so the explosion and joy of interest and attention came after we’d already started envisioning season two.” At the same panel, Sandra Oh gave the move her stamp of approval “It was such a good match. I don’t know how much you guys know, but Emerald and Phoebe are friends and have been friends for a very long time, and I feel like they have a kinship and sensibility, where they come from their humour and their style.”

So lots to look forward to. And, just because we can, here's a sneak peek at what's coming up in Season 2 because, "Sometimes when you love someone, you will do crazy things."