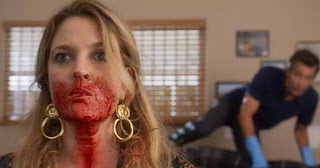 Steve Taylor-Bryant indulges his taste for Drew Barrymore and binges on Season 3 of Santa Clarita Diet...

Our mutant spider ball is sick and the Nazi meat rotted...

I started watching this show purely because I love Drew Barrymore, then I fell in love with how funny and dark the whole thing was. The show went from strength to strength, got weirder which I didn’t think was possible, and just when I thought it would be all over and Anne would finally take Sheila down season 3 happens and the entire show took on a biblical farce that had me roaring with laughter. Anne now believes that Sheila is on a mission from God, a modern-day Jesus, and is determined to spread her message despite Sheila and Joel not wanting the attention. The Knights are closing in so the entire Serbian conspiracy issue is still prevalent, and Eric and Abby are still worried they will be caught for the fracking site explosion. A show that starts with someone eating Nazi’s because Nazi’s are bad and she’s hungry seems like a weak and strange plot premise, but it really works, and Joel’s comments about them being a sustainable food source nowadays is a scary yet funny line that somehow grounds the weirdness in our own reality.

As well as trying not to get caught Sheila and Joel are trying to be parents to Abby, and get their realtor business of the ground, whilst Abby and Eric and are trying to stay out of the grasp of the F.B.I. Wherever Sheila goes some of Anne’s disciples from her church group turn up thinking Sheila has some divine guidance for them, her advice working is not helping her case, and lets not forget the head of Gary in the Hammond’s basement who somehow becomes an employee of the realtor company using an Alexa and a headset to start up a website and print some flyers.

Honestly, I am reading this back and I realise how nuts all my words sound but Santa Clarita Diet is just so much fun to watch and I haven’t even mentioned the ball with legs yet! If you need some fun in your life, these episodes are only 20 some minutes long and add to your daily enjoyment needs. Barrymore continues to impress, Olyphant continues to be a poor man's Billy Bob Thornton with aplomb, and everybody else on the cast plays their part perfectly. For such a strange story this show is perfectly executed.